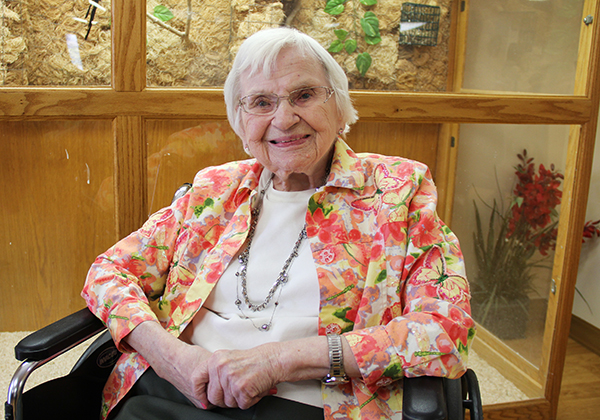 A positive attitude, a close family and a lot of faith.

Though her eyesight and hearing are waning, Woodside said she has otherwise always been healthy.

While she hasn’t always eaten the healthiest or exercised — she jokes she didn’t exercise until she came to Thorne Crest three years ago — she said she has never had a serious operation.

Born on a farm in Illinois less than a month after the Titanic sank in the north Atlantic Ocean, Woodside grew up by Delavan and Frost. She went to a country school before attending high school in Blue Earth. She can still recite some of the poems she learned in school as a child.

Woodside said she grew up without electricity or running water and only recalled having one doll.

She said she remembers when World War I ended because school was let out early that day.

She started working when she was 16 at a canning factory and also worked at a grocery store before she married Vern Hunnicutt in 1933. Together they had two boys and one girl.

While married, she cleaned houses.

After Hunnicutt died, Woodside married Gary Woodside in 1978. He died in 2000, and three years ago she came to Thorne Crest.

“She’s always been very loving and caring,” Swanson said. “Everybody loved her to this day. My mom always had a lot of friends, young and old.”

“They don’t just like her, they love and admire her,” added Woodside’s stepdaughter-in-law, Orlene Woodside.

A member of First Lutheran Church in Albert Lea, the Thorne Crest resident said she has Bible devotions every day.

Her daughter said when her eyesight was better, her mother used to love to read, do crossword puzzles and play cards and Scrabble.