In just his second week of retirement, former detective supervisor Chuck Malepsy says he won’t be unemployed for very long. 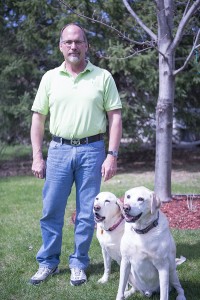 Recently retired detective supervisor Chuck Malepsy poses for a photo with his dogs Dakota and Trigger outside of his Albert Lea home. Malepsy retired from the Freeborn County Sheriff’s Office after more than 30 years of service. – Colleen Harrison/Albert Lea Tribune

“I have no intention of being the stereotypical ‘do-nothing’ retiree,” said Malepsy. He plans on looking for a new full-time job as soon as next week.

Malepsy on April 25 finished a career spanning more than 30 years with the Freeborn County Sheriff’s Office. He was a jailor and a patrol deputy before becoming a detective about 15 years ago.

Malepsy was born and raised in Albert Lea. A 1979 Albert Lea High School graduate, he spent one year at Bemidji State University before graduating from Alexandria Technical and Community College with a law enforcement degree in 1982.

He knew for a long time that he wanted to go into law enforcement. Malepsy had an uncle with the Albert Lea Police Department and was involved with public service organizations throughout his childhood, through his church and through Boy Scouts.

“I’ve always enjoyed being with people and helping people,” he said.

What will he miss most about his time with Freeborn County? The people, whether they were the ones he worked alongside in the Sheriff’s Office or the ones he came into contact with through the job.

“I like dealing with good people, good residents … being out and about, seeing people you don’t get to see very often,” said Malepsy.

What Malepsy won’t miss about working in law enforcement is the all-too-often tragic side.

“I’ve seen too many people die, too many get hurt,” he said.

Malepsy said he had three main goals for his career: To stay with Freeborn County, to reach both 50 years of age and to have 30 years of service while on the job. He’s done all three.

Malepsy, 53, lives in Albert Lea with his wife, Jo Ann, and their dogs, Dakota and Trigger. The couple has been married 30 years and have known each other for over 40 years. Malepsy said they met while in junior high school. He said his wife is happy he’s retiring and won’t be bringing the heavier side of his work home with him anymore, but is a bit apprehensive and hopes he’ll find something he’ll like to fill his time with sooner rather than later.

Malepsy said that he had been talking about retiring for the past year, and that when he started planning it the Sheriff’s Office wasn’t in the quandary he said it’s in now.

“Being around good people and friends, it’s phenomenal,” he said.

Chuck “was very easy to work with… we were good friends right away,” said Kindler. “We never said a mean word to each other.”

Kindler joined the Sheriff’s Office in 1987 and worked with and alongside Malepsy both on patrols and during investigations over the years.

When asked if they’ll keep in touch now that Malepsy’s retired from law enforcement, Kindler said, “I certainly hope so.”

Malepsy said he’s certainly going to miss the interactions that came with the job.

“I really appreciate the people of Freeborn County that worked with me and the public that helped,” he said.

Interesting fact: He and his wife have two dogs named Dakota and Trigger. He hunts and fishes in his spare time.