Memorial services for Agnes V. Dolmetsch, 98, of Albert Lea will be at 11 a.m. Friday at First Lutheran Church. Dr. Kyle Fever will officiate. Interment will be in Central Freeborn Lutheran Cemetery at a later date. Visitation will be one hour prior to the service at the church on Friday. Online condolences are welcome at www.bayviewfuneral.com. 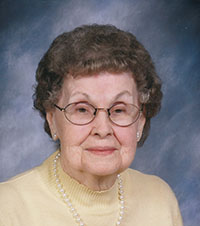 Agnes Valborg Dolmetsch was born June 30, 1915, in rural Driscoll, N.D., the daughter of Oscar and Mina (Gunderson) Severson. They moved to Manchester Township when Agnes was a baby. She was baptized and confirmed at West Freeborn Lutheran Church. Agnes attended District No. 18 School and graduated from Albert Lea High School.

She worked at Ma’s Café on South Broadway where she met her husband, A.C. Larson. They were married on May 29, 1938. They soon moved to Vallejo, Calif., to do electrical work in the shipyards there. Agnes went to school to become a switchboard operator. After World War II ended, the ship building closed. They moved to Delaware, where A.C. worked on electrical work for the highway and Agnes worked as a typist and receptionist at Wilmington Trust.