A memorial service for Alanzo “Lonnie” Johnson will be at 10 a.m. Saturday at Bonnerup Funeral Service in Albert Lea. Visitation will be one hour prior to the service at Bonnerup Funeral Service. The Rev. Terry Mahnke will officiate. Interment will be at East Cemetery in Rake, Iowa. Online condolences are welcome at www.bonnerupfuneralservice.com. 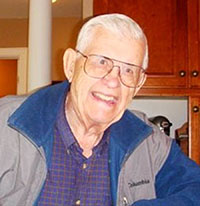 Alanzo died surrounded by family at Prairie Senior Cottages in Albert Lea May 9, 2014. He was 90 years-old.

Alanzo Everett Johnson was born on May 18, 1923, to Gustave and Susan (Ryg) Johnson in Rake. Alanzo was baptized and confirmed at Zion Lutheran Church in Rake. He graduated from Rake High School. During the war years he worked in California and Nebraska in the defense industries and then came home to help out at the Rake meat market. Lonnie farmed with his brothers and especially enjoyed raising angus cattle.

Lonnie was united in marriage to Betty (Folven) on Oct. 20, 1945, at the Little Brown Church in Nashua, Iowa. To this union three sons were born.

Lonnie was an active community member and served on the Rake School Board, as trustee at Zion Lutheran Church, chairman of the ASCS County Township Committee and was well known as being a Winnebago County Supervisor. He was a member of the Golden K Kiwanis in Albert Lea.

In his spare time, Lonnie enjoyed driving and traveling the country, including a driving trip to Alaska. He enjoyed spending time with his family at his lake cabin near Grand Rapids. Lonnie was a sports fan and especially enjoyed the Iowa Hawkeyes, Minnesota Twins and the Rake Tigers. But above all, his family was most important to him. Lonnie was a wonderful grandpa, who was always there for the grandkids. He was a very devoted man, and always had time for his family.

Lonnie is preceded in death by his parents; wife, Betty; and brothers Odin, Irvin, Sidney, Russell and Herman.

The family wishes to thank the staff at Prairie Senior Cottages, Oak Park Place and Bancroft Creek Estates for their love and kindness in caring for Lonnie.

In lieu of flowers, donations may be made to the Rake Cemetery Fund or Zion Lutheran Church in Rake.