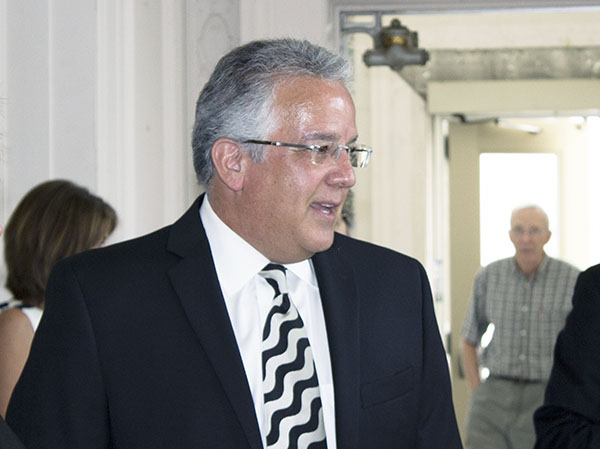 The Albert Lea Art Center’s push to move into the Freeborn National Bank building took a big step Tuesday evening with the kickoff of its capital campaign, which aims to raise $500,000 for improvements to the first floor of its future home.

The kickoff took place at the Freeborn National Bank, presently owned by the city. The Albert Lea City Council approved a sale of the building Tuesday night for $400,000 to a Kansas-based developer. 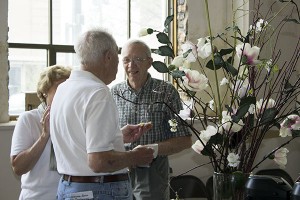 City Manager Chad Adams complimented the Art Center and said he thinks the city is excited for the community gallery to move in to the Freeborn National Bank. The Art Center presently occupies a space on Clark Street.

The keynote speaker was Clint Jayne of Cohen-Esrey, the firm purchasing the Freeborn National Bank building that intends to turn it into income-based housing with a public community space on the first floor. Jayne said that he, the city and the community all believe it is important to have a public space available in the Freeborn National Bank, and the Albert Lea Art Center just seemed to be the right fit.

This project isn’t without its hurdles, though. Jayne said that the project will be funded by housing and historical tax credits. The tax credit applications are “no small feat,” Jayne said, and will cost upwards of $35,000 to apply for.

Another hurdle is for the Albert Lea Art Center itself. While Cohen-Esrey will restore the building, the main floor will be “white boxed.” White boxing involves finishing all of the HVAC, electrical, plumbing, wiring, plasterwork and floors. As there’s no money in the budget to completely design the Art Center’s new space, that’s where the capital campaign comes in.

While the rent that Cohen-Esrey established for the Art Center was $1 per year, the renovations and annual upkeep of the facility will cost a lot more.

Jayne said that this building would be self-sufficient. All of the rent collected from the apartments would be used to keep the building running. As for any revenue that the Art Center makes from renting out the space, it would go toward paying utility bills and other payments, Jayne said.

“I have no desire to change that,” Jayne said.

After the keynote speech, Jayne and Dorman had a question-and-answer session.

One attendee asked why the apartments aren’t market-rate. The apartments will be income-based instead of market-rate because there are no tax credits for market-rate housing, Jayne said. The rent for a one-bedroom market-rate apartment in the new Freeborn National Bank would be $1,700 per month to support the building’s expenses and debt, and the market doesn’t support that high of a rent.

Another attendee asked about the Art Center’s building lease. The building lease hasn’t been decided yet, Jayne said. He mentioned anywhere from 15 to 25 years, but the actual terms haven’t been figured out.

An attendee asked what would happen to the donation money if the project were to fail. Dorman said that the donations would be returned to each donor, as he said the money couldn’t be kept in good faith, even if it was going to be used for a different project.

Another attendee asked if state Sen. Sparks, DFL-Austin, or state Rep. Savick, DFL-Wells, have been contacted for getting funding  from state or federal sources, and Dorman said that they haven’t. He said that he would like this to be a community effort.

“We will make this project happen,” Dorman said.

The tax credit application is due in June, Jayne said, and awards are handed out in October. If the project receives the tax credits, Jayne said that the new Freeborn National Bank building will be open for operation as an apartment building in October 2015.