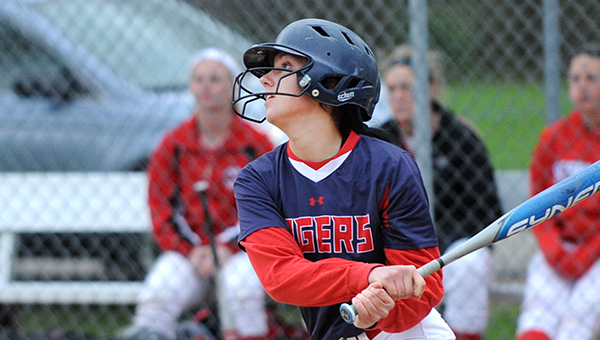 Megan Kortan of Albert Lea watches the ball after hitting it Thursday against Mankato West on Senior Night at the Hammer Complex. — Micah Bader/Albert Lea Tribune

Senior Night at the Hammer Complex marked the end of an era for five players on the Albert Lea softball team.

After Thursday’s 10-0 loss in five innings against Mankato West, the Tigers have two games left during the regular season with in a doubleheader starting at 4 p.m. today at Faribault.

The postseason bracket is already filled out, and Albert Lea is the No. 5 seed in Section 2AA. The Tigers will play at No. 4-seed Waseca at 5 p.m. Tuesday in the first round of the tournament.

Cantu had the nod to start. In three innings, she faced 13 batters and allowed five hits, six walks and a home run. Schilling entered the game in relief and gave up four hits and a walk.

Albert Lea coach Dan Harms said he was happy to get the duo experience at the varsity level.

“Any time we can get a couple JVers on the roster, it’s a good thing,” he said. “It calms their nerves a bit when they get up to varsity.”

Underdahl leads Albert Lea at the plate this season with a .411 batting average, but she was held without a hit. Megan Kortan led the Tigers by going 2-for-3 with a double.