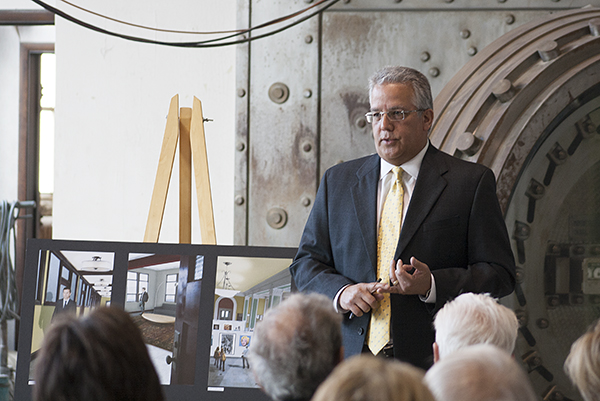 Developer Clint Jayne of Cohen-Esrey talks about plans for the Freeborn National Bank and Jacobson Apartments buildings on Tuesday night to a crowd of about 150 residents. – Sarah Stultz/Albert Lea Tribune

A Kansas-based developer on Tuesday announced plans for 21 multi-family housing units in the upper floors of the Freeborn National Bank and Jacobson Apartments buildings with the Albert Lea Art Center on the main floor. 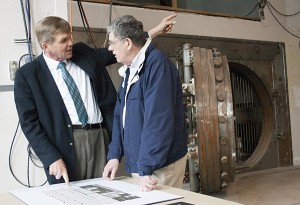 In front of a crowd of at least 150 people, Clint Jayne of Cohen-Esrey said he is excited at the opportunities he thinks will come to the downtown once the building is complete.

“Our job is to bring the lady back and restore her to the place she once was,” Jayne said.

When completed, one-bedroom units would cost about $460 a month to rent, while two-bedrooms would be about $540, he said. They would be open to anyone regardless of age but would be income limited, with residents only being able to make about $34,000 a year.

He said he plans to put solar panels on the roof to reduce costs of heating and cooling in the common areas and on the main level.

“This is an exciting, exciting project,” Jayne said.

The city has owned the buildings since 1998. 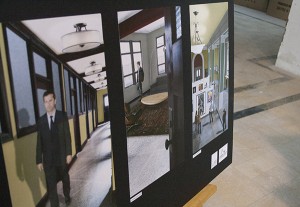 Renderings for the Freeborn National Bank building were on display Tuesday night during an open house. – Sarah Stultz/Albert Lea Tribune

Cohen-Esrey, based in Overland Park, Kan., could start signing people up to rent the units about eight weeks before the buildings are complete. The buildings would generate property taxes.

The community could also rent out the main floor for community use.

Jayne thanked former city leaders for their foresight to invest $2 million into the exterior of the building and said the project would not have been a reality were it not for that investment. 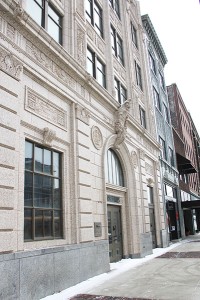 The Freeborn National Bank and Jacobson Apartments buildings are on the corner of South Broadway and William Street in Albert Lea. – Sarah Stultz/Albert Lea Tribune

“That wisdom, that investment, made today possible,” he said, noting that this investment is going to generate energy downtown worth far more than the $2 million initially put in.

If all goes according to plan, the city and Cohen-Esrey would close on the sale of the property by January 2015, with construction to be completed in September or October of the same year.

Jayne said the project would be paid for through both historic and housing tax credits. If the project does not get the credits in the first application, he will re-apply until it is awarded.

It would be similar to how the Lofts at Lea Center is operated.

Bev Jackson Cotter, the Art Center treasurer, said she is excited to be a part of the project.

“I can’t describe the feeling I have to see that building be used again,” she said.

She said the Art Center will start a capital campaign to raise money for its needs on the main floor.

Pam Schmidt, a Realtor with Coldwell Banker who was also on the Historic Preservation Commission, said she agrees with the need for residential units on the upper floors, and as a member of the Art Center, she is pleased with the choice for the main floor.

“I’m very, very happy,” said Schmidt, who is now on the Albert Lea Planning Commission. “It’s going to be great for our community.”

Former Community Development Director Bob Graham said the plans for the building were what he expected to hear. Using historic and housing tax credits makes the project feasible.

The Freeborn National Bank was built in 1922. It was originally constructed as a bank on the first floor and medical and professional offices in the upper floors. The Jacobson’s first two floors were constructed in 1888, and the two upper floors were added in 1923. The buildings share a staircase and elevator.

The two buildings have been under city ownership since 1998.

In 2007, the city spent about $2 million to restore the exterior of the Bank Building, including tuck-pointing, a new roof, a skylight and new water, sewer and electrical service to the buildings, among other improvements. Inside, crews have cleaned out asbestos, filled in the basement and taken out a majority of the plumbing.

• May 20: The Albert Lea Planning Commission will review the proposed use for the buildings.

• May 27: The Albert Lea City Council will have a public hearing on the sale of the building and development agreement.