It will offer food and live music at its main office in Buffalo Center, Iowa, in conjunction with celebrating 100 years in business. The bank has branches in the Iowa towns of Lake Mills, Britt and Lakota and the Minnesota town of Bricelyn. The celebration takes place Aug. 23. 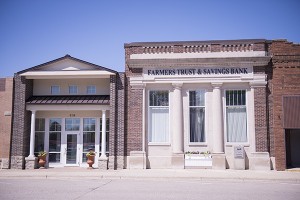 A contest is ongoing through May 23 for the anniversary. It gives participants a chance to win $100,000. People go to www.ftsbbank.com and fill out a questionnaire on why they like the bank.

Brian Vander Wilt is the current president and CEO of the Buffalo Center branch and has been with the branch for about 34 years.

The Bricelyn branch was named State Bank of Bricelyn for about 100 years until a 2012 merger with Farmers Trust & Savings Bank.

Farmers Trust has about 51 employees between all of its branches, eight of which work out of the Bricelyn location. Two of the eight employees work with Bricelyn Insurance Agency, which is housed in the same building and was bought at the same time as the May 2012 merger. Overall, Farmers Trust has more than $230 million in assets.

Doug Leland is vice president of the branch, 219 N. Main St. in Bricelyn. Leland, a Bricelyn native, has worked at the location since 1994, when it was still State Bank and was vice president at the time of the merger.

Leland called the merger of the two banking institutions a “perfect fit” and said it was well-received by the community. The merger helped update the bank technologically by services like online banking and ATMs more accessible to the branch’s customers.

Another improvement that came with the merger is the bank’s increased lending limit, which Leland said helps the bank’s main customer base: farmers.

The bank’s previous lending limit was $500,000. According to Leland, in the past 10 years financial needs in agriculture have increased with higher prices for land and equipment and higher input costs. The bank’s current lending limit of $3.9 million helps them to better service their predominant customer base.

According to Leland, those improvements are only part of the reason why Farmers stands out.

“The unique thing about Farmers is that it’s an employee-owned bank,” said Leland.

He said about 85 percent of the bank is owned by its employees. “Not very many do that.”