Business clothes for the modern woman

Brooke Jacobson (on the left) works as a graphic designer for Minnesota Corrugated Box and lives in Albert Lea with her husband, Jeremy, son, Charlie, and daughter, Nora.

Her interests include interior design, do-it-yourself home projects, cooking, being outdoors and spending time with family. When asked what was her favorite part about modeling, she replied, “It was fun accessorizing the looks.

I don’t always take the time to do that myself, so it was fun to see how it really made the outfit pop.”

Tracy Brenegan (on the right) lives in Albert Lea with her husband, Tim, daughter, Leighton, and golden retriever, Daisy. She spends her days working as a medical coder for Mayo Clinic Health System in Albert Lea and, in her free time, enjoys reading, cooking, going for walks and spending time with family and friends. Despite being under the weather at the time, Tracy enjoyed the entire modeling experience, saying it was something out of the ordinary and fun trying on all the looks with her friend, Brooke. 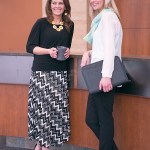 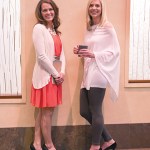 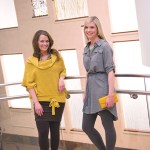