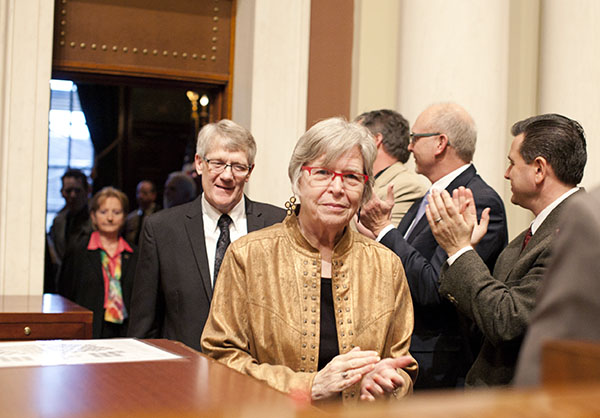 ST. PAUL — Minnesota Gov. Mark Dayton says the state is making progress in delivering services to people and businesses that interact with government.

In his State of the State address Wednesday night, the governor said the Legislature and his administration have made sped up government tasks and become more responsive.

Dayton said moves to cut bureaucratic red tape have meant faster environmental permits for businesses and shorter waits for people with motor vehicle transactions. For example, he said it now takes an average of 19 days to register a car compared with the needed three months previously.

He says his “unsession” campaign to prune the books of outdated or duplicative laws have resulted in 121 deletions so far.

District 27A Rep. Shannon Savick helped escort Dayton to the floor of the House of Representatives, where the governor spoke before both House and Senate members.

She said she thought Dayton’s speech was a good reminder about the progress made and what still lies ahead.

“We’ve increased funding for education and boosted funding for job training and job creation, but there is still work to be done,” Savick said. “It was an honor to be able to take part in this event as the Representative for our communities. We’re working quickly to finish our work on time this session, and it was great to hear Gov. Dayton speak in support of that work tonight.”

House Republican Leader Kurt Daudt of Crown gave the following statement in response to the State of the State Address Wednesday:

“Gov. Dayton is good at taking credit but not at taking responsibility. He’s responsible for one of the largest tax increases in state history and the largest spending increase in state history. He oversaw the approval of a $90 million office building for politicians and allowed 280,000 Minnesotans to be forced off their current health plans because of Obamacare in Minnesota.”

He said Dayton focused on the state of his re-election campaign.

Dayton made a last-ditch push for $1.2 billion in public works borrowing.

A construction projects bill is among the major items yet to complete before lawmakers head home.

Coming into their session, Democratic and GOP legislative leaders said they would craft a bill limited to $850 million. But Dayton implored lawmakers in his State of the State on Wednesday to shoot higher so a greater backlog of projects can be addressed.

Unlike most measures, it requires a supermajority for passage so Republican buy-in is critical in the Democratic-controlled Legislature.

One of Dayton’s invited guests was the mayor of Luverne in Minnesota’s southwestern corner. The city is counting on state bonding dollars for the Lewis and Clark water project deemed essential to shortages in that region.

Dayton appealed for a “unity of purpose” among lawmakers seeking to push Minnesota forward, saying differing political philosophies shouldn’t keep them from achieving progress in a state that he says is “much better than before.”

In the capstone State of the State address of his term, Dayton asked the Legislature to keep the idea in mind as they finalize tax-cut and spending bills in coming weeks that rely on a budget surplus. He urged them to pass a $1.2 billion construction projects bill, which is substantially more than one under consideration.

“While we may not find a unity of means, I believe we do share a unity of purpose,” the Democratic governor said. “We all love this state. We all want to see it prosper.”

Republicans had panned the speech in advance as a political look-ahead to Dayton’s re-election campaign. The last time a State of the State address was delivered so late in the year was Democratic Gov. Rudy Perpich’s address on April 21, 1977. Dayton’s speech comes as lawmakers are scrambling to conclude their annual session by May 19. Governors usually give the speech toward the start of the legislative session to lay out their objectives.

The timing has a lot to do with an early-February hip surgery that sidelined the governor for weeks and still requires him to move around on crutches. Dayton entered the House chamber from a side door rather than making the ceremonial walk down the center aisle while shaking hands.