Doede was born April 8, 1921 in Franklin County, Iowa, the son of Elmer Larsen and Bernice Harms Larsen. He moved to Minnesota where he was raised by his grandparents. Doede attended elementary school at Maple Island Grade School and Albert Lea High School. 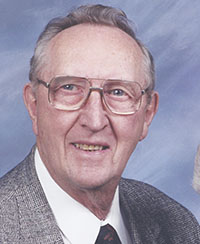 He was married to Eleanor Almira Karsjens on April 12, 1941, at Baptist Church in Austin by the Rev. Leo Sandgren and the couple recently celebrated their 73rd wedding anniversary.

Doede was a vegetable farmer and became a construction supervisor with Lysne Construction Co., where he worked for 32 years. In his younger years, he enjoyed fast pitch softball and trapping. He was an avid hunter and fisherman and liked camping, gardening and building things. Doede and Eleanor enjoyed traveling and spending winters in Arizona. Family was always most important to him.

Doede was preceded in death by his parents and grandparents.

Funeral services will be at 1 p.m. Tuesday at Grace Baptist Church, East Campus, 100 Fourth Ave. SE in Austin, with the Rev. Brett Williams officiating. Interment will be in the Blooming Prairie Cemetery. Visitation will be at the church on Tuesday for one hour before the service. Clasen-Jordan Mortuary is in charge of arrangements.