Editorial: Super Bowl is chance to puff out our chests

NFL Commissioner Roger Goodell came close to promising that the Twin Cities would host another Super Bowl when he met with the Editorial Board in April 2012 to lobby for a new Vikings stadium.

But Goodell, a savvy veteran of stadium negotiations, stopped just short of a pledge, saying a new and improved NFL venue would give the Twin Cities a chance to “compete” to host the nation’s most-viewed and talked-about spectacle. 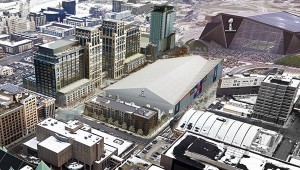 The competition for the 2018 game took place Tuesday in Atlanta, where NFL owners picked Minneapolis over bids from Indianapolis and New Orleans.

It’s a choice worth celebrating, most importantly because the game and related activities will give this region a chance to show off in front of a worldwide audience. Minnesotans are not the boastful type, but civic pride is an increasingly valuable asset in the economic competition with cities like Seattle, Portland and Indianapolis, which has capitalized on major events to boost its convention business and visitor-friendly downtown.

Stadium critics — and there are many — will question the economic-impact projections tossed around between now and Super Bowl kickoff in 2018. We agree that boosters are often too quick to goose the numbers, but Super Bowls and Final Fours attract tens of thousands of out-of-state fans who spend money that would otherwise never cross our borders. The impact, as one Super Bowl booster put it to us, is not nothing. Just look at average hotel occupancy rates in the Twin Cities for February.

But beyond the debate over spending multipliers and but-for dollars, the 2018 Super Bowl will give Minneapolis and St. Paul the opportunity to tell a new story of post-recession economic vitality to out-of-town visitors and the TV audience.

What they’ll see are two increasingly vibrant downtowns tied together by an efficient transit system. In Minneapolis, the new Vikings stadium, Downtown East and the reborn Nicollet Mall will be ready for prime time. That kind of exposure is priceless, as Indianapolis found out with the 2012 Super Bowl.

Richard Davis, the civic-minded U.S. Bancorp CEO who helped lead the Minneapolis bid process along with former Carlson CEO Marilyn Carlson Nelson and Ecolab CEO Doug Baker, recently said stadium critics need to “get over it.” That’s not likely to happen — ever — but we’d urge those who opposed public help for the Vikings to embrace the opportunity a Super Bowl presents for a region that needs to puff out its chest a little more often.