Funeral services will be at 2 p.m. Saturday at Center Evangelical Lutheran Church in rural Lake Mills with the Rev. Thomas Rank officiating. 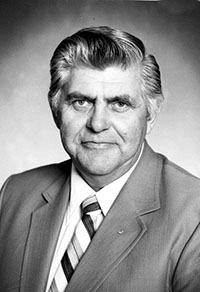 Visitation will be from 4 to 7 p.m. today at Mittelstadt Funeral Home, 902 E. Main St. in Lake Mills, and again at the church one hour prior to the service.

Gorden Andrew Anderson was born March 6, 1932, on the family century farm in Winnebago County, Iowa, the son of Gilmer and Nettie (Hylland) Anderson. He was baptized and confirmed at Center Evangelical Lutheran Church, where he remained a lifetime member. He attended country school and graduated from Lake Mills High School.

Gorden was united in marriage to Sharon Kay Geddes at Center Evangelical Lutheran Church on May 31, 1953.

Gorden was a lifetime resident of Winnebago County where he farmed, served as Winnebago County supervisor, an auctioneer, served on the Lake Mills school board, was a member of the Lake Mills Ambulance, ASCS County Township Committee, previous member and vice president of Aid Association for Lutherans Branch No. 3324 and previous Manufactures Bank & Trust Advisory Board member. He was one of the original members of the North Iowa Snow Jammers Club. He was a part-time bus driver for Lake Mills School and the Good Samaritan Society in Albert Lea. He especially enjoyed serving on NIVIC and NICOG boards, where he made many friends.

Gorden moved to Good Samaritan Society of Forest City in April 2013 and loved it there.

He was preceded in death by his parents; his daughter, Diane, and one sister, Gloria.