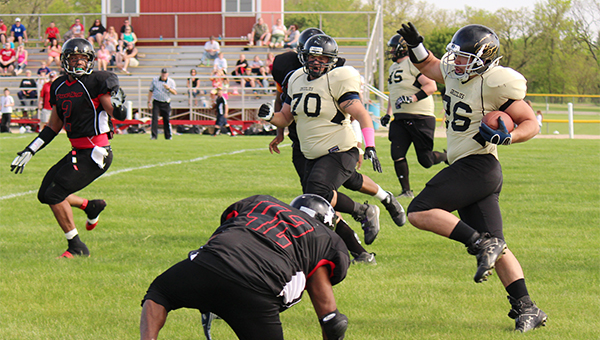 The Albert Lea Grizzlies bounced back from their second loss of the season to beat the North Iowa Bucks 59-14 Saturday at Rockwell, Iowa, according to a press release.

Grizzlies coach Stephen Piper said he was impressed with the effort shown by his defense. 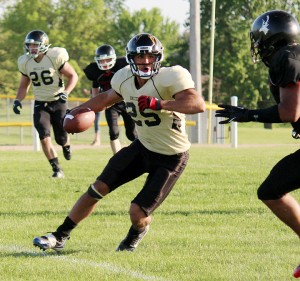 “While our offense found the end zone easily and often, our defense really did an outstanding job of shutting down the Bucks offense.” he said. “Our defensive line had five sacks — led by Matt Bernhardt with two — and our secondary had four interceptions. Jered Talamantes had two picks. It’s hard to get an offense moving when the defense is all over you.”

In the first quarter, the Grizzlies (3-2 overall) offense stalled on their opening drive, but their defense stepped up on the ensuing possession. After forcing the Bucks (0-4 overall) to punt, Albert Lea’s offense found its rhythm and drove the ball down the field. With less than four minutes left in the first quarter, Tony Tolbers crossed the goal line on a one-yard quarterback keeper. Juan Vega’s kick was no good, but the Grizzlies led 6-0.

The Bucks were held in check by the Grizzlies defense on their next possession, and the ball was punted back to Albert Lea. The Grizzlies’ offense resumed where it left off and scored on a 38-yard run by Lamar Sayles with less than two minutes left in the first quarter. Vega’s kick was good to give Albert Lea a 13-0 advantage. 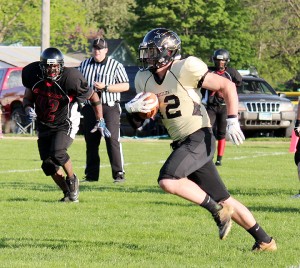 North Iowa mounted its first scoring drive in the second quarter. It was a 61-yard drive, and the Bucks completed a two-point conversion to cut their deficit to five points, 19-14. The Grizzlies answered with less than a minute left in the first half. The drive was capped by Sammie Rucker Jr., who caught a 9-yard pass from Tolbers. The extra point was no good.

The Bucks responded on their next drive with a 35-yard pass for a touchdown. The two-point conversion was unsuccessful. On Albert Lea’s next possession, Tolbers drove his team inside North Iowa territory and unleashed a bullet to Manuel Hernandez who had found a hole in the Bucks defense. Hernandez walked into the end zone untouched. The extra point was good, and the Grizzlies led 26-14 at halftime.

To start the third quarter, the Grizzlies picked up right where they left off. A four-yard touchdown run by Rucker — his second of the day — capped a 39-second drive. Vega added another successful extra point.

The Bucks continued to struggle to complete a drive, and the Grizzlies scored again with 4 minutes, 27 seconds left in the third quarter on a 38-yard pass from Tolbers to Sayles. Vega’s extra point was good, and Albert Lea led 40-14.

Marquis Shaw carried the ball into the end zone on a sweep with 38 seconds left in the third quarter, and the Tigers led 47-14.

In the fourth quarter, the Grizzlies pounded the ball on the ground and ate up the clock. Albert Lea fullback Spencer Niebuhr finished off a drive with a 1-yard run. The point after try was no good because of a botched snap, and Vega was unable to advance the ball. However, Albert Lea led by 39 points.

The Grizzlies defense continued to hold the Bucks’ offense. Pressure from Albert Lea’s defensive line and excellent coverage by the secondary kept the Bucks offense from scoring any more points.

With 13 seconds to go on a running clock, the Grizzlies ended the game with a 3-yard Rucker touchdown run.