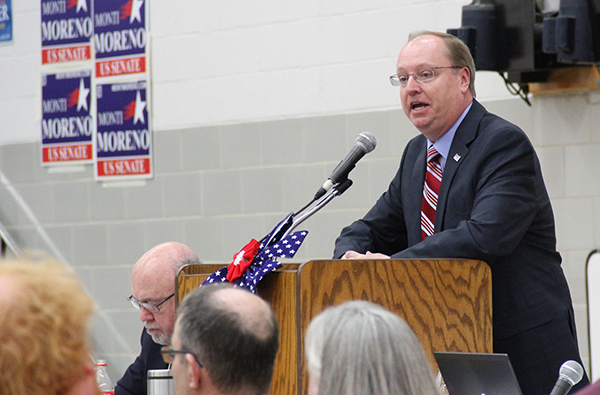 After the third ballot at the Republican Convention at Southwest Middle School on April 5, businessman Jim Hagedorn of Blue Earth announces his intention to step down. – Tim Engstrom/Albert Lea Tribune

A candidate who pledged not to force a Republican primary in Minnesota’s First Congressional District has changed his mind.

Jim Hagedorn was one of three GOP candidates vying for the party’s nomination last month.

State Rep. Mike Benson lost in the first two rounds of balloting and dropped out after the second round. That left Hagedorn and Byron businessman Aaron Miller. In the third round, Miller got 56 percent of the vote. That was short of the 60 percent needed for victory, but Hagedorn agreed to step aside for the sake of party unity.

Before the convention — held at Southwest Middle School in Albert Lea on April 5 — all candidates agreed to abide by the vote of the delegates rather than force a Republican primary in August. The winner would challenge Democratic U.S. Rep. Tim Walz this fall.

“The endorsed candidate has not fulfilled the promises to run a fulltime campaign and outwork Walz,” he said in a press release. “I am ready to reconnect with the people and devote 100 percent of my time and energy taking the race and issues to Tim Walz.”

As of press time, Miller’s team has not issued a statement in response.