Memorial services for Jeanette Mortenson of Albert Lea will be at 11 a.m. Saturday at the Bonnerup Funeral Chapel. The Rev. Al Stoa will officiate. Interment will be held privately at a later date. Visitation will be from 5 to 7 p.m. Friday at Bonnerup. 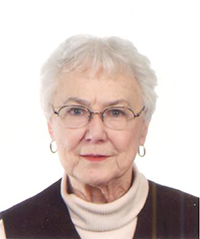 Jeanette Mortenson was born Nov. 22, 1919, and delivered at the family farm by her uncle, Dr. E. O. Vollum. She was the daughter of Martin and Laura (Johnsrud) Vollum, the middle child of one brother and three sisters. She was baptized into the Lutheran faith and christened Helen Jeanette; however, her first name was never used except for legal purposes. She was confirmed at East Freeborn Lutheran Church by the Rev. Finn Magelssen.

Her formal education began with eight years at country school No. 88, with graduation from Albert Lea High School in 1938. She was a lifelong learner, enjoying books, conversations and the Internet to broaden her life.

She married Robert Franklin (Bob) Mortenson on May 11, 1941, and they lived their entire life in Albert Lea as the family business was the Albert Lea Milk Co.(Morlea Dairy). World War II interrupted their early married life, so Jeanette returned to the family farm with daughter Barbara while Bob served three years in Africa. Later, two more daughters, Laurie and Susan, were born.

Jeanette was very active in Circles, Altar Guild, Bible School and WELCA at Trinity Lutheran Church. Bob and she later joined First Lutheran Church in Albert Lea where she was involved in the church’s activities until her health declined.

She was a homemaker until their children completed their high school educations. She then worked for School District No. 241 and several years at Wilson & Co. as a secretary to the general managers.

In her youth she was an active member of the Riceland 4-H Club, and it always amused her that she could say that she had been Miss Minnesota as she was crowned with that title at the State Fair for her sewing project. This qualified her to compete in her award-winning outfit in Chicago with the other state winners.

Memorials may be sent to First Lutheran Church Peace and Power or a charity of choice. The family would like to recognize and thank St. John’s First North staff and Crossroads Hospice for their exceptionally loving care.