Just for Kix dances to the music 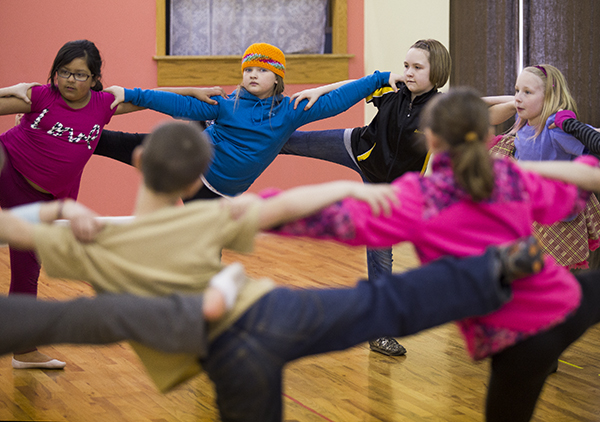 Aimee Struck loves what she does, and it comes through in her dance students’ performances.

Struck took dance lessons when she was younger and taught and assisted in lessons throughout high school. She’s a 1988 graduate of Albert Lea High School and went to Mankato State University, now named Minnesota State University, Mankato, afterward. She said she always wanted to do something with dance right out of high school, but her parents wanted her to go to college first. 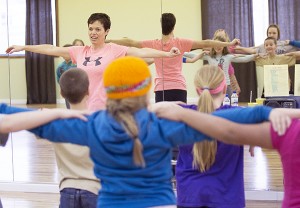 Aimee Struck leads her class during a rehearsal Monday at Just for Kix in Albert Lea. Struck opened the dance studio in 1996 and has been dancing since she was a kid. – Colleen Harrison/Albert Lea Tribune

After working with children with behavioral and emotional difficulties at Lakeview Elementary School, Struck opened her own dance studio, Just for Kix, in 1996 in Albert Lea. It was originally located in Northbridge Mall, before moving to City Arena, and is now at 1360 W. Main St.

“It’s not like work most days, it’s awesome,” Struck said.

Just for Kix offers dance lessons for those as young as 3, all the way up through high school seniors. Struck teaches the classes for second-graders and above, while two other teachers, Holly Jackson and Becky Morgan, teach the younger students and assist Struck with the older ones. Struck usually teaches between 10 and 14 classes a week depending on when shows are. 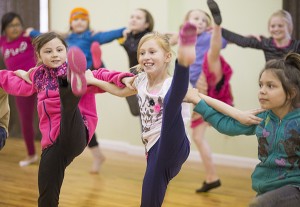 “Working with kids is rewarding,” Struck said. “It’s a privilege to watch these kids grow up.”

Just for Kix emphasizes teamwork and dance team style in a number of its classes.

“Doing your best is more important than being the best,” Struck said. With that being said, dancers from the studio have won 11 awards between their two competitions so far this season, according to Struck.

The culmination of the dance studio’s season is Sunday’s spring show, “Dance to the Music.”

Dancers from all age groups will perform in both shows, and will perform kick, jazz, lyrical, hip-hop and pom routines.

There will also be a partner dance during the shows, with fathers, uncles, grandfathers, brothers and other older male relatives pairing up with the dance students. Struck said there will be about 39 pairings in the younger classes, and 30 to 35 in the older ones.

Just for Kix’s season is eight months-worth of 32 classes that run from after Labor Day through the spring show in late April or early May. Classes are typically once a week and last either 30 minutes or one hour depending on the age of the students.

Sunday’s performances are at 2 and 4:30 p.m. at Albert Lea High School. Admission is $6 for adults, $4 for students and children 5 and under are free.