Funeral services for L. Richard Bryson, 83, of Albert Lea will be at 10:30 a.m. Tuesday at First Lutheran Church. The Rev. Al Stoa will officiate. Interment will be in the Alden Cemetery with military honors accorded by the American Legion and VFW Honor Guards. Visitation will be from 4 to 7 p.m. today at Bayview Freeborn Funeral Home. There will be a Masonic service at 7 p.m. and the visitation will continue one hour prior to the service at the church on Tuesday. Online condolences are welcome at www.bayviewfuneral.com. 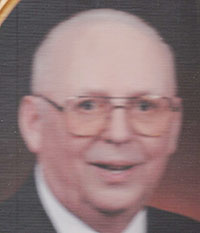 Dick died on Friday, May 9, 2014, at Mayo Clinic Health System in Albert Lea.

Lawrence Richard Bryson was born on May 16, 1930, in Alden, the son of Lawrence and Hulda (Peterson) Bryson. He grew up in Alden, graduating from Alden High School in 1947. Dick served in the U.S. Air Force from 1951 to 1955. He served in the medical lab of a M.A.S.H. unit and was awarded a Bronze Star and the Korean Service Medal. On June 26, 1955, Dick was married to Mavis Anderson at First Lutheran Church. He worked as a farmer, as an estate planner, the vice president of Security Seed and co-owned Bubbles car wash with his son, Victor. Dick was a member of First Lutheran Church, a life member of the Western Lodge No. 26, a life member of the Royal Masons – Albert Lea Chapter No. 30, he was a member of the Apollo Commandery No. 12, the Knights Templar and served as the president of the Albert Lea Shrine Club in 1991. Dick also was a life member of both the American Legion and the VFW. He was a member of the Elks Lodge.

He enjoyed travel with his family, he loved to go to Disney World in Florida with his grandchildren. He traveled to Spain, Ireland, Hawaii, Mexico and went on a Caribbean cruise. He especially enjoyed the southwest part of the country, Arizona and Texas, visiting with friends and family.