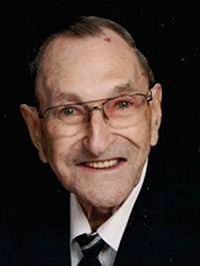 On March 12, 1943, he enlisted in the U.S. Navy, serving in the Aleutian Islands during World War II. On Feb. 15, 1948, he married Alice Neumann at St. Peter’s Lutheran Church in New Richland. In 1950, they moved to Albert Lea where LeRoy worked for Concrete Minnesota as a truck driver. Upon retirement in 1998, they moved to Rochester and to Owatonna in 2013.

He was preceded in death by his son, Charles Otto; his parents; and his five brothers, Walter, Earl, Irwin, Ralph and Charles.

Funeral services will be at 10:30 a.m. Monday at St. John Lutheran Church with the Rev. Dave Klawiter officiating. Interment will be in the Graceland Cemetery in Albert Lea. Military honors will be provided by the Steele County Military Funeral Unit. Michaelson Funeral Home is handling arrangements.