Lowell Gilmer Brown was born Aug. 19, 1931, to Gilmer and Caroline Brown in Halstad, the youngest son of four children. His mother was a homemaker and later worked as the postal assistant, and his father was the town policeman.

His love of music started early. He sang solos in grade school and learned to play the trumpet in middle school. Growing up along the Red River, he enjoyed swimming and fishing for catfish. He learned the joy of singing harmonies with his friends in high school. 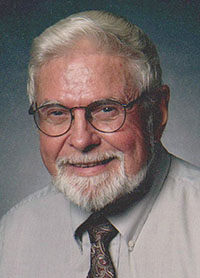 He attended North Dakota State University for pharmacy where he met Nellie Kinzie. After graduation, they were married on Sept. 26, 1954, in Wheaton. He began his pharmacy career in Halstad and soon moved to Hibbing to join his fraternity brother to work in Huffer’s Drug Store. He and Nellie started their family and had four children and built a home in Hibbing.

Lowell had many hobbies and interests, such as photography and electricity. He wired their new home and was a ham radio operator. He enjoyed family vacations to seine for minnows and water skiing on northern Minnesota lakes and driving through the redwood forest in California.

They moved to Albert Lea, and Lowell began his career at Naeve Hospital as the pharmacist.

He enjoyed camping with his family and participated in Indian Guides with his boys. He was a lifelong gardener and dog lover. He was a member of the Daybreaker Kiwanis Club in Albert Lea.

In 1995, he and Nellie traveled to China to visit their son and family, went to New York City to visit another son and went to Arizona in the spring to see their third son.

He was a charter member of the Albert Lea Harmony Junction Chorus and sang in the First Lutheran Church choir.

He spent many hours playing jazz trumpet and joined other musicians at dances and parties. He loved to read, especially science periodicals, and had fun sharing jokes and puns.

Lowell retired from the pharmacy in 2003. Nellie and Lowell divided their retirement years between Albert Lea and Sun City West, Ariz. In Arizona, he joined the Desert Aires Barbershop Chorus and sang in the Visitation Choir from the Lord of Life church for the area nursing homes.

Lowell passed away on Jan. 8, 2014, in Sun City West. He was preceded in death by his parents; brother, Merle, and sister, Esther.

He is survived by his wife, Nellie, of 59 years; children Robert, of Aurora, Colo., and his son, Joel, Patricia and husband, Vern Frydenlund, of Hayward and their children Rachel, Sarah (Ben Moore) and Brett, Steven Brown and wife, Christy, of New River, Ariz., and their children Jordan and Matthew, and Michael Brown and wife, Maggie, of St. Paul and their daughter, Charlotte. He is also survived by his brother, Glenn Brown, and wife, Harriet, and many nieces and nephews.

A memorial service will be at 10:30 a.m. Saturday at First Lutheran Church. Visitation with the family will be one hour before the service.