Funeral services for Marvin A. Drescher will be at 1 p.m. Wednesday at Grace Lutheran Church in Albert Lea. The Rev. Janet White will officiate. Visitation will be from 11 a.m. to 1 p.m. Wednesday at Grace Lutheran Church. Burial will be at Hillcrest Cemetery. Military honors will be accorded by the Albert Lea Veteran’s Association. Online condolences are welcome at www.bonnerupfuneralservice.com. 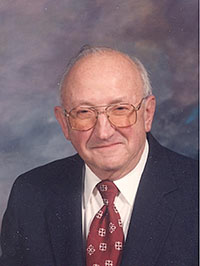 Marvin passed away on Saturday, May 10, 2014, at Thorne Crest Retirement Center. He was 89 years-old.

Marvin Arthur Drescher was born on Aug. 19, 1924, to Henry and Amanda (Katsung) Drescher in Freeborn County. After his schooling, Marvin enlisted in the United States Army, where he served in World War II.

Following his discharge, he was united in marriage to Fern (Richter). To this union, two children were born. Together, Marvin and Fern were residents of Albert Lea for 63 years.

He will be remembered as a caring and wonderful person, who loved his family.

Marvin is preceded in death by his parents and brothers, Orville, Norman, Herbert and Elsworth.