Mother’s Day feature: When parents deployed, who would watch son? 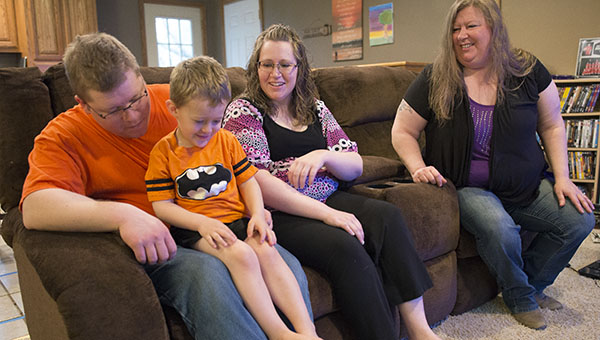 From left, Sean, Gabriel and Leslie Willaby and Leslie’s mother, Kari Baseman, pose for a photo in the Willabys’ Glenville home. Baseman took care of Gabriel when his parents were both deployed overseas. — Colleen Harrison/Albert Lea Tribune

GLENVILLE — Leslie Willaby will always be thankful for her mother. 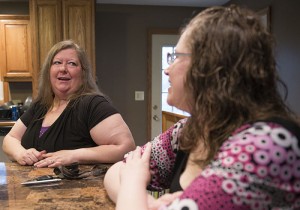 Kari Baseman, left, talks with her daughter, Leslie Willaby, right, who was deployed to Kuwait while in the Minnesota National Guard. Baseman took care of Willaby’s son, who was 8 months old at the time, while both Willaby and her husband were overseas. Baseman laminated a photo of Willaby and showed it to her grandson, Gabriel, every day so that he would recognize his mother when she returned home. — Colleen Harrison/Albert Lea Tribune

Two and a half years ago, when her son, Gabriel, was 8 months old, Willaby received a phone call that would change her life.

The 25-year-old Glenville resident was a member of the Minnesota National Guard and found out that both she and her husband, Shaun, were going to be deployed to Kuwait.

She was shocked because she was not initially on the deployment list.

“I thought, ‘Gosh, what am I going to do?’” she said, wondering how she could leave her baby behind. “The first thing that popped in my head was my mom was going to take care of him.”

The young family at the time was already living with her mother, Kari Baseman, and it seemed like a natural fit for them both.

“I think this was kind of tough for her because not only is she my daughter, but she’s my best friend,” Baseman said. “I was scared, but I didn’t try to let her see that.”

The husband and wife were deployed at Camp Buehring from September 2011 through May 2012.

While there, Willaby said she she talked with her mother and son every other day on Skype. Most of the time, Gabriel would be in his high chair ready for breakfast or a snack. 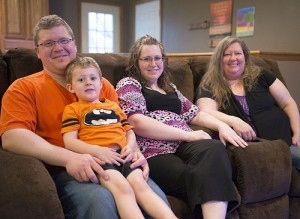 From left, Sean, Gabriel and Leslie Willaby and Leslie’s mother, Kari Baseman, pose for a photo in the Willabys’ Glenville home. Baseman took care of Gabriel when his parents were both deployed overseas. — Colleen Harrison/Albert Lea Tribune

“She helped me be the best mom I could be even though I was thousands of miles away,” Willaby said.

She said though she hated being away from her son, she was relieved to know he was in her mother’s care.

Through Skype, she saw Gabriel’s first steps and celebrated his birthday.

“I got to watch my son grow up because of her,” Willaby said. “I could never thank her enough for this.”

Baseman said while her daughter was deployed, she and little Gabriel developed a close bond and he began to seem more like one of her own children than a grandchild.

The family had pictures taken of Willaby before her deployment and had them laminated and hanging in Gabriel’s crib.

Shortly after returning home from Kuwait, Willaby was diagnosed with multiple sclerosis and was ultimately medically discharged from the military.

Willaby said her mother was the first person she called when she heard the news, and she gave her words of encouragement.

Though the mother and daughter no longer live under the same roof, they said they see each other probably every other week.

“She’s taught me to be more of an independent person — that you need a good work ethic to make it anywhere in life,” Willaby said.

Willaby, who graduated from Alden-Conger High School in 2007, cleans the Freeborn County Department of Human Services building, while Baseman is an independent contractor for RPM Motor Sports.

Baseman is married to her husband, Wade, and has four children and seven stepchildren.

Willaby also has a stepson, Carter, 8, and has another on the way in July.