Funeral services for Muriel Loretta Katzenmeyer, 75, of Oviedo, Fla., will be at 11 a.m. Friday at Hayward Lutheran Church. The Rev. Katie Fick will officiate. Interment will be at Hayward Cemetery. Visitation will be one hour prior to the service at the church.  Online condolences are welcome at www.bayviewfuneral.com. 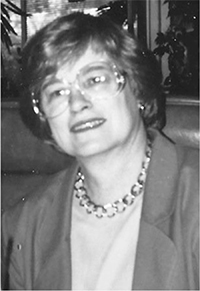 Muriel Loretta Katzenmeyer was born on Nov. 28, 1938, to Lee and Charlotte (Buggy) Dieteman in Minneapolis. She grew up in Minnesota where she graduated from St. Louis Park High School and earned her Bachelor of Art in sociology at the University of Minnesota in 1961. Muriel was a Life Loyal member of Alpha Omicron Pi Women’s Fraternity. She later earned her Master of Arts in statistics from Western Michigan University.

Muriel was united in marriage to Conrad G. Katzenmeyer. At the age of 28, she moved away from Minnesota but continued to have a lifelong interest in her home state, attending many Minnesota State dinners in Washington, D.C.

Throughout her life Muriel worked for the Madison, Wis., public schools; Kalamazoo County, Mich., Department of Mental Health and for the National Geographic Society in the Geography Education Program in Washington, D.C.

As her children began to leave for college, she developed a love for dogs, having many over a 30-plus year period. She volunteered for the Fairfax County, Va., animal shelter and attended the Westminster Kennel Club show in Madison Square Garden several times. Her beloved dogs Sara, Cassie, Jenna, Abbie, Bailey and Chai brought so much to her life.

She inherited a love of reading from her mother. In the digital age, she made the most of her Amazon Kindle, enjoying history, mysteries and popular fiction. She enjoyed classical and choral music, works by Mozart for clarinet and flute were her favorites, and seeing the St. Olaf Choir when it toured, most recently in Orlando.

Muriel cheered for college football teams with a connection to her immediate family, including Michigan State, Minnesota, Northwestern and Wisconsin.

Muriel was preceded in death by her parents; godmother, Loretta Dieteman Koppen; siblings Anne and Deanne Dieteman; and her in-laws Conrad and Dorothy Katzenmeyer .

In lieu of flowers, memorials are preferred to the LUNGevity Foundation.