Funeral services for Omer Ellsworth Helland will be at 2 p.m. Monday at Redeemer Lutheran Church in Alden. The Rev. Greg Ofsdahl will officiate. Interment will be in the Alden Cemetery with military honors accorded by members of the American Legion and VFW Honor Guard. Visitation will be from 5 to 8 p.m. Sunday at Bayview/Freeborn Funeral Home and one hour prior to the time of the service at the church on Monday. Online condolences are welcome at www.bayviewfuneral.com. 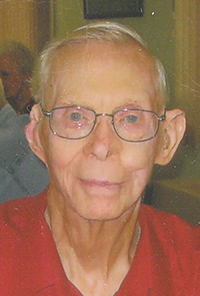 Omer Ellsworth Helland was born on July 9, 1922, in Emmons, the son of Ole and Ingaborg (Martinson) Helland. Omer grew up in Emmons and went to high school in Albert Lea. After school he began working for Ebert Plumbing when he was 19-years-old. He was very passionate about his career.

On April 19, 1942, Omer was united in marriage to Eleanor Jahnke. Following her death, Omer married Verna (Petersen) Seedorf on June 1, 1963.

Omer served in the U.S. Army during World War II in the Pacific Theater.

He was a member of Redeemer Lutheran Church, the Golden K2 Kiwanis and the Alden American Legion. Omer was an avid reader, enjoyed golfing, fishing and played the violin. In his younger years he was a member of the “Rhythm Rascals” band.

Omer was preceded in death by his parents; his wives Eleanor and Verna and his grandson, Ryan Omer Helland.