Funeral services for Ruth W. Nicholson, 87, of Wells and formerly of Emmons, will be at 10:30 a.m. Thursday at Mansfield Lutheran Church. The Rev. Donald Rose will officiate. Interment will be in Mansfield Township Cemetery. Visitation will be from 4 to 6 p.m. today at Bayview/Freeborn Funeral Home and one hour prior to the time of the service at the church on Thursday. Online condolences are welcome at www.bayviewfuneral.com. 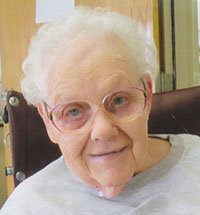 Ruth Winifred Nicholson was born on Feb. 26, 1927, in St. Paul, the daughter of Hjalmar and Anna (Strombeck) Wolander. She grew up in Cannon Falls and went to school there through her sophomore year. She graduated from Red Wing High School in 1945.

Following high school, Ruth worked in the telephone office in Red Wing and also at Red Wing Pottery. She worked as a nurse’s aide at the Swedish Hospital also.

On Sept. 2, 1954, Ruth was united in marriage to Edwin O. Nicholson at St. Paul’s Lutheran Church in Red Wing. They lived in the Emmons area and farmed.

Ruth went back to school at the Albert Lea Vo-Tech. She earned a degree in sales marketing and management in 1980. Ruth was an active distributor for the Watkins Co. She had stands at the Freeborn County Fair, Farming of Yesteryear and the Wells Gun Show, among other events.

She enjoyed music, needlepoint, bowling, ice skating, volleyball, soccer, fitness and walking. She and Ed were both devoted animal lovers.

Ruth was preceded in death by her parents; her husband, Ed, and her last dog, Koko.