Skol Tavern at Trail’s Travel Center is kind of like an airport bar.

“What’s fun about this place is we meet a ton of people from pretty much all over,” said Assistant Manager Nicole Thompson. 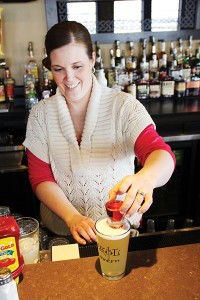 Skol Tavern Assistant Manager Nicole Thompson plops a shot of raspberry liqueur into a Leinenkugel’s Summer Shandy beer to create a raspberry boiler. Behind her are some of the bar’s wide selection of whiskeys.

There are truckers, travelers and locals, and all three make fast friends.

But the place is priding itself on its whiskey selection — 50 kinds. Manager Ken Fluth has researched the region and says Skol Tavern has the largest selection of whiskey in southern Minnesota.

“There’s no way anybody has that many choices,” he said.

The most expensive are two bourbons, Booker’s and Baker’s, each at $10 a shot. Woodford Reserve Double Oaked runs $9.50 a shot. Some are as low as $3.50. Reliable Canadian whiskey Crown Royal is $5.50. However, the bar offers a second shot for a dollar. Fluth says most people go for the two-shot deal.

When Skol Tavern opened last year, it offered a variety of drinks to meet anyone’s tastes. Now that the managers know the customers, the menu is targeted to them, Fluth said. Whiskey won out.

He worries not about the truckers or travelers drinking and driving. Many stay in sleeping compartments or at nearby hotels. Sometimes truckers who arrive Friday or Saturday cannot deliver their load in the Twin Cities until Monday morning. Truckers lose careers for drunken driving, but they are allowed to unwind after a long haul, just like anyone else after work. Fluth’s main concern is with locals who want to drive home. More and more locals, he said, are finding Skol Tavern’s mix of company enjoyable.

He does want to dispel a rumor that the bar has a two-drink limit. It never had one, either.

But it does have a new drink menu, specializing in boilermakers. The raspberry boiler will quench any summertime thirst.

Domestic beer and a shot of Jack Daniels.

A lemon shandy beer with a shot of raspberry liqueur.

A pineapple shandy beer with a shot of peach schnapps.