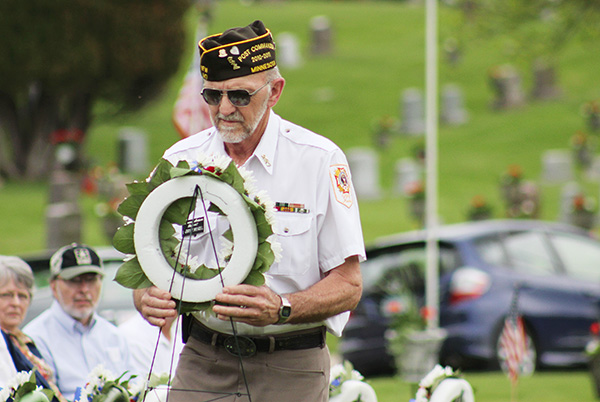 Larry Weigel with the Veterans of Foreign Wars Post 447 carries a wreath to be placed in front of a memorial at Graceland Cemetery in Albert Lea on Monday. – Sarah Stultz/Albert Lea Tribune

Honor Memorial Day and pause to remember the fallen.

“Opportunities are boundless to show that the fallen live on in our hearts and we cherish them,” Dahlen said.

In front of a crowd of at least 200 people, Dahlen talked about all the country has overcome to be where it is today, particularly since 9/11, and encouraged the community to support military families, especially Gold Star families, who have lost a loved one in war.

“These families deserve our respect, gratitude and the very most support we can provide,” he said.

Since 9/11, he said 316 service members have died with next of kin in Minnesota. That includes both men and women and soldiers both young and old.

Dahlen said Memorial Day is much more than a day to grill out or plan vacations. People should encourage others to honor the day.

Resident Sonja Troe, who attended the ceremony with her husband, Duane, said she and her husband make it a priority each year to attend the event.

“It’s Memorial Day; that’s what it’s here for,” she said.

They planned to attend several local cemeteries after the event to pay their respects to loved ones who have died.

Veterans groups had smaller ceremonies at several cemeteries in the area earlier in the morning, along with a parade downtown. The parade marshal was David Skogheim, Albert Lea Legionnaire of the Year.

Also, a wreath was dropped into Fountain Lake from an airplane. 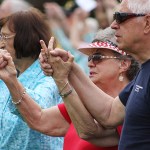 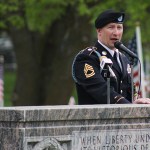 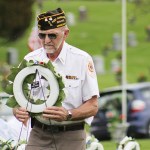 Larry Weigel with the Veterans of Foreign Wars Post 447 carries a wreath to be placed in front of a memorial at Graceland Cemetery in Albert Lea on Monday. – Sarah Stultz/Albert Lea Tribune 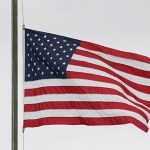 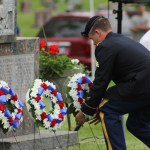 Nick Farris with the Minnesota National Guard places a wreath during a ceremony at Graceland Cemetery on Monday. – Sarah Stultz/Albert Lea Tribune 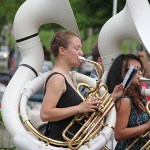