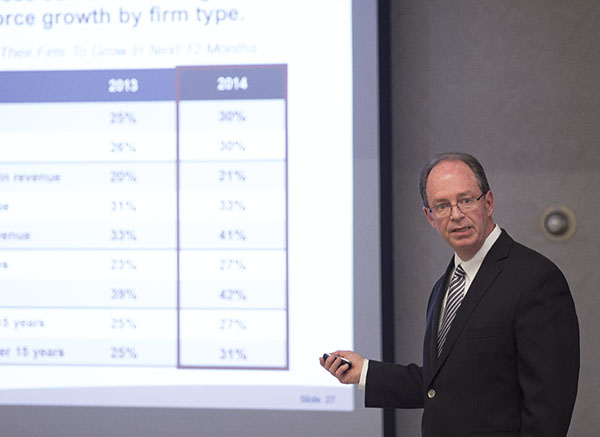 Confidence is high among Minnesota business leaders, more so than at any time since 2009, according to a statewide survey. At the same time, they are worried about health insurance costs and about finding, recruiting and retaining talented workers.

About 30 Albert Lea business officials attended a presentation Monday at Freeborn-Mower Cooperative Services about the 2014 results of the State of Manufacturing Survey.

Overall, 84 percent of executives say they are confident about the future of their firms, which is the highest recorded mark in the survey’s six-year history. The number of manufacturers who claimed they were “very” confident in their company’s future jumped eight points from 28 percent in 2013 to 36 percent this year. And confidence is especially high (96 percent) among companies with more than $5 million in annual revenue.

This optimistic outlook extends to the economy as a whole. Only 7 percent of manufacturers have recessionary concerns for 2014. Fifty-four percent expect a “flat” economy in 2014 and 37 percent anticipate economic expansion.

The cost of health care is once again the top concern among manufacturers at 59 percent, followed closely by government policies and regulations at 55 percent. The ability to attract and retain qualified workers continues to be a growing issue statewide with 34 percent of respondents listing it as a key concern, a 20-point jump since 2011. In Greater Minnesota that number jumps to 43 percent, while in the Twin Cities metro area, 28 percent of manufacturers consider worker shortages a key concern.

Minnesota’s business climate is increasingly seen as unfavorable by manufacturers, with 51 percent saying the state is on the wrong track, the highest total since 2010. Forty-eight percent of respondents said issues “such as taxes, regulations and policy uncertainties” might negatively impact their firm’s growth. Rising health care and insurance costs were seen as the next largest potential growth inhibitors at 31 percent.

The survey was conducted by Enterprise Minnesota, a manufacturing consultant based in Minneapolis. Results initially were released May 8 at the Minneapolis Convention Center, and the presentation in Albert Lea was part of a series of briefings taking place around the state this and next month.