There is plenty of activity at Bancroft Bay

Once in a while, I come across someone who doesn’t realize just how much activity the two disc golf courses at Bancroft Bay Park attract to Albert Lea since Oak Island Disc Golf Course was built two years ago. 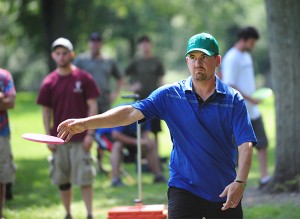 I am an avid disc golfer and want to dispel the notion that these courses haven’t attracted tournaments. The most notable one was the Minnesota State Disc Golf Championship on Aug. 17 of last summer. Our sports editor covered it, while I shot photographs.

The tournament used the two courses, called Oak Island Disc Golf Course and Tall Grass Disc Golf Course. Tall Grass is the easier of the two, and I helped make the Tall Grass course more challenging by removing some baskets and combining holes to create extra-long fairways. The tournament director and helpers set out strings to create bounds along the existing mow lines. We added some temporary baskets on a nearby property. As for Oak Island, they played it as is.

The winner, Chris “Critter” Meyer, was crowned state champion for 2013. Players from all over Minnesota came to play or spectate. The coverage appeared on the Aug. 19 Sports Page.

The 2013 Mider Cup was held in October at Oak Island. The Mider Cup is a team-style tournament like conventional golf’s Ryder Cup. Players came from teams representing the Minnesota Frisbee Association’s four zones: north, south, east and west. I played on the South Zone team, because they need one person on each team who is 40 or older. Though I am a discer, the Tribune cannot cover every tournament that happens out there. However, it does publish the results. The Mider Cup results were printed in the Scoreboard.

This year, league play is on Thursdays and Sundays. Doubles league is at 5:30 p.m. Thursday, and singles league is alternating at 1 or 4 p.m. Sundays. Both leagues alternate between the two courses.

The Albert Lea Open was April 20. The Bancroft Bay Open is slated for June 22. Both are sanctioned by the Professional Disc Golf Association. A third Albert Lea PDGA-sanctioned tournament is on the schedule this time around the sun. It is called the Battle of Bancroft Bay and is set for this Saturday.

Plus, we see recreational and out-of-town disc golfers stop by to play rounds all the time.

Parks are meant to be used. Disc golf has done its job of bringing people to the parks. I wouldn’t be surprised that, if numbers were kept, Bancroft Bay Park visitation rivaled that of just about any park in the city. It for surely must have had the greatest growth in visitation since 2008, when Shinefest installed the Tall Grass course.