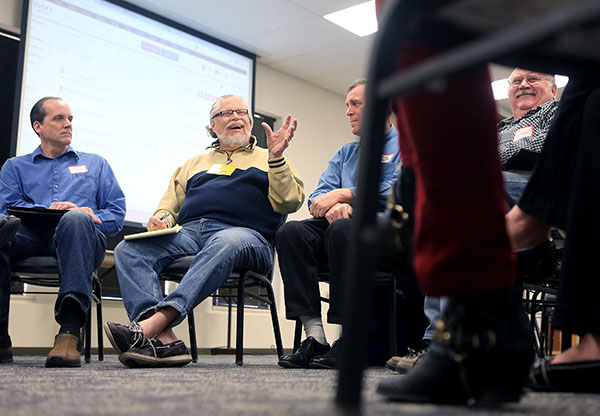 Lonny Gulden, center, leads a prayer group during the Job Transition Support Group at Wooddale Church in Eden Prairie on Monday. The group meets weekly and provides job seekers with coaching, counsel and a chance to network. – Jeffrey Thompson/MPR News

EDEN PRAIRIE — Every Monday morning, at 7:15, before most people with jobs punch in for the day, hundreds of Minnesotans gather to help each other find work.

They’re part of a job transition group at Wooddale Church in Eden Prairie, where unemployed workers share leads and ideas, take seminars on resume writing — and offer each other spiritual support. 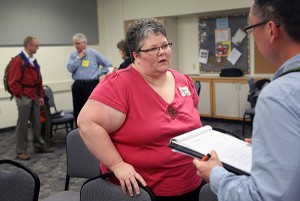 “Father God we thank you so much for the privilege we have of coming together, to work together, to find a job,” offered Vicki Pond, one of the job seekers, in a prayer. “And Father, for some it’s been a long process.”

Although unemployment in Minnesota is running far below the national average, it’s still taking many Minnesotans an unusually long time to find work. Nearly 40,000 workers in the state have been job hunting for six months or longer.

Pond lost her job in the compliance department of an insurance company a year and a half ago, in a mass layoff. She is pursuing a bachelor’s degree because she’s worried her associate’s isn’t enough. But it’s not clear if that’s the problem.

“I’m told by some people, ‘Well, we’re really looking for someone with a bachelor’s or master’s degree,’” she said. “And then [by] other people, I’m being told I’m overqualified,” she said.

As workers like Pond struggle to understand the reasons for their long-term unemployment, experts are puzzled too. It’s not a familiar problem.

Cramer said about one third of the nation’s jobless workers have been looking for work six months or more. That portion is historically high.

The Great Recession, Cramer said, pulled all manner of workers into long-term unemployment. There are equal numbers of women and men and they hail from a wide range of sectors, not just hard-hit industries like construction and manufacturing.

Cramer said even in state like Minnesota, where the jobs recovery has been decent, long-term unemployment remains stubbornly elevated. Twenty five percent of Minnesota’s unemployed workers count as “long-termers.”

“We don’t have the statistical evidence to back up the claim that all we need is for the labor market to improve and then the situation for the long-term unemployed will go away,” he said.

Cramer and his colleagues think two big factors are making long-term unemployment so entrenched, despite economic improvements. On the one hand, workers lose their skills and morale the longer they’re out.

“They’re more susceptible to breakdowns in family, to increase in depression and to all of these other factors that hinder not only their ability to find jobs but also to hold jobs in the future,” Cramer said.

There is also strong evidence, he said, that employers discriminate against workers who’ve been out of work a long time.

“Sometimes that thought comes up and I go, ‘ach!’” said Colleen Towns, who was part of a mass lay-off at Supervalu. “It’s been a while, and I get a little anxious.”

But Towns, who has been out of work nine months, is not worried about being stigmatized yet.

“I know people who’ve been out twice as long, and they’ve landed fantastic positions,” she said.

The Brookings Institution study suggests the best way to help the long-term unemployed may be to retrain them in fields that are growing. According to the report, workers aren’t doing that much on their own so far.

But Towns is. She’s pursuing a certificate in medical coding and billing to add to the bachelor’s degree she already has in finance.

She hopes the effort will open more doors — and show employers she’s not someone who’s languishing in long-term unemployment.