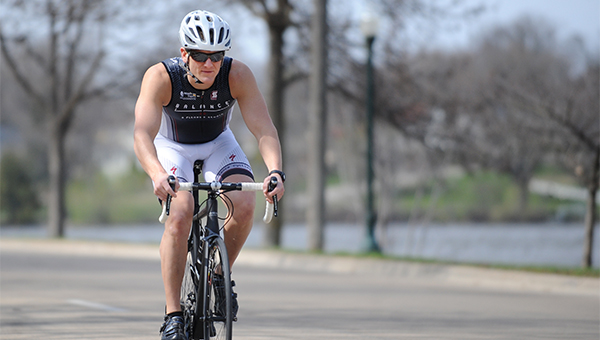 Kyle Anderson rides his carbon fiber road bike from LaMere Cycles in preparation for the Land Between the Lakes Duathlon, a race that starts next Sunday at Edgewater Park. — Micah Bader/Albert Lea Tribune

Kyle Anderson’s weapon of choice has two wheels and a carbon fiber frame.

He plans to make his bicycle — an ultra-light road bike from LaMere Cycles — into a gray blur on the course of the Land Between the Lakes Duathlon next Sunday at Edgewater Park. 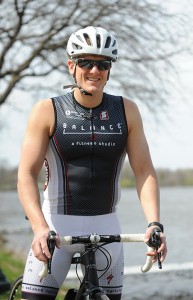 Kyle Anderson stands over his carbon fiber road bike from LaMere Cycles by Fountain Lake in preparation for the Land Between the Lakes Duathlon, a race that starts next Sunday at Edgewater Park. — Micah Bader/Albert Lea Tribune

Anderson, a MIG welder at Lou-Rich and a 2005 graduate of Albert Lea High School, is a supporter of area events that promote fitness. Within a two-week span, he’ll have participated in the Freeborn County Bike-A-Thon and the duathlon.

“It’s awesome when they’re in town,” he said. “I can get out of bed at a decent time, make a nice breakfast and go race.”

The nearest other race Anderson participated in was a triathlon in Waseca, which is a 40-minute drive.

Anderson’s interest in fitness began six years ago after he graduated from Century College in White Bear Lake.

“When they say a body in motion stays in motion, it’s true,” he said. “The more you do, the more active you stay and the better you feel.”

This year will mark the second time he participated in the Land Between the Lakes duathlon. However, the race evolved over the years, said Lynn Scheevel, a member of the Land Between the Lakes Duathlon steering committee. It began as a triathlon with a quarter-mile swim, 21-mile bicycle ride and a 4.2-mile run. Two years ago, Final Stretch — a race management company — took over and cut seven miles from the cycling portion of the race. Final Stretch decided to drop the event this year, but community members and sponsors from Albert Lea fought to keep it going.

The Albert Lea Noon Kiwanis took over as the organizing body, and it was changed to a duathlon by cutting the swimming portion. The duathlon will be a 2-mile run followed by a 14-mile bike ride and 3.1-mile run.

“With the way the winter was with the ice on the lake and the temperature that the water has been in years past, it scared a lot of people off,” Scheevel said.

The committee hopes that by eliminating the frigid swimming, it will make the event more family friendly.

“Fitness-wise anyone can do it,” said Ross Williams, a member of the steering committee. “Anyone can run, and anyone can ride a bike.”

“He realizes that small-town races are an important thing for the community, and he helps us with that,” Williams said. “He also recognizes and is very knowledgable about some of the top competitors across the country in multi-sport.”

Participants are encouraged to register at http://bit.ly/1btFS2e before the midnight Thursday deadline. However, late registrations will be accepted from 6 to 8 p.m. Saturday at Country Inn and Suites and the morning of the race at Edgewater Park.

The event will utilize ChampionChip technology from Pickle Events to produce precise times. Participants can compete as individuals or as part of a team.

What: Land Between the Lakes Duathlon

What else: Spectators are welcome