Minnesota farmers may be looking at a financial squeeze this year. The wet spring has eliminated drought in much of the corn belt, suggesting a big crop could be on the way. That’s helping drive down prices below the break even level for a lot of producers. 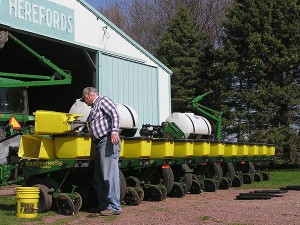 Michael Wojahn gets his equipment ready to plant soybeans on his southwest Minnesota farm on May 14. It’s been a mixed bag so far this spring for state farmers. – Mark Steil/MPR News

In southwest Minnesota, Michael Wojahn is among those who may feel the punch. As he prepped his equipment recently to plant soybeans, he said he was making good spring planting progress so far this year. One reason for that is because of the continued moderate drought conditions in the southwest corner of Minnesota. While the dry weather is a concern, it’s also allowed farmers plenty of planting time in the fields.

That’s in contrast to much of the rest of Minnesota, where heavy rains have delayed fieldwork. In some cases, there’s been so much delay that farmers could miss key planting deadlines and risk losing some crop insurance benefits. But Wojahn said that despite the dryness on his farm some 100 miles southwest of the Twin Cities, he’s still optimistic.

“Forty-plus years of farming and I haven’t lost a crop yet,” Wojahn said.

So far, he said he likes what he sees. In one corn field, he gots down on his hands and knees, and dug up a corn seed that will become part of Minnesota’s $5 billion corn crop, checking to see if the seed is ready to pop a new stalk out of the ground.

“Here you go, it’s just really getting started,” Wojahn said. “You’ve got that little shoot heading up and the root heading off down the side there.”

That shoot should produce an ear of corn by fall containing hundreds of kernels ready to be sold. Exactly what sort of price Wojahn will get for that corn though is a big question. Commodity analyst Darin Newsom at DTN, said it almost certainly will be nothing close to the record $8 a bushel price of a couple years ago. Newsom said if good weather produces a big U.S. crop, already low corn prices could go even lower.

“We could see the corn futures drop down into the low four-dollar range, and cash prices drop into the upper threes,” Newsom said. “And that would certainly get a lot of attention.”

“That’s not going to be a real winner for a lot of producers,” he said.

Swanson said that with similar prices last year, many farmers lost money on their corn. That fits with the findings of a team of academic researchers in Minnesota who collect financial data each year from more than a thousand farms in the state. Last year, they found low corn prices meant most farmers lost money on rented land. About two-thirds of the acres in the data were rented.

A sustained run of high corn prices has pushed up rents, as landlords tried to capture some of the wealth their land was producing. But with grain prices on the downswing, those higher rents are growing red ink.

Some especially hard hit farmers lost more than $200 per rented acre last year. Swanson said that, especially for small farmers, a repeat of those losses again this year could push them to the economic brink.

“It’s just going to be a real tough decision, can I get big enough to compete or do I have to exit the business,” Swanson said.

Getting bigger could help because it would spread the costs of machinery and labor over more income producing acres. But there’s also risk in the strategy. It could mean even higher rental prices, because the farmer would have to outbid others who are also eager to have more crop land.

As Wojahn finished working on his planting rig recently, he said that even with the dry weather and the troubling outlook for corn, he’s still happy to be farming. For one thing the last few years have been good to him.

Even though the outlook for corn is gloomy, Minnesota’s $4 billion soybean crop should be profitable, offsetting some of the poor returns on corn. If things get really bad, Wojahn said there are always non-financial benefits to his job.

“There’s a lot of satisfaction too in producing something from the ground, and watching it grow,” he said.