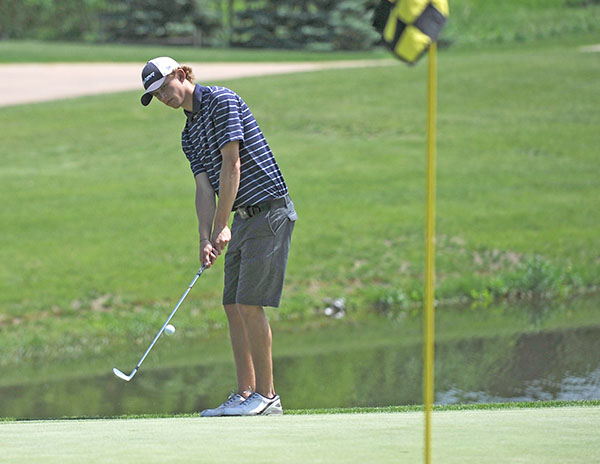 JORDAN — It was a bittersweet day for the Albert Lea boys’ golf team at the Section 2AA finals held at Ridges at Sand Creek.

The six-man team missed out on a trip to the state tournament by two strokes — losing to Mankato East by a combined score of 311-313. Only one team advances to state from the section finals. The Tigers were left on the outside looking in.

It was a result that was “tough to stomach,” according to Tigers coach Riley Worth.

Albert Lea had faced Mankato East in the subsection finals the previous week, falling to them by a single stroke.

“It was a tough battle all the way,” Worth said. “We knew it was going to be close.”

Though only one team moves on, five other players outside of the winning team were eligible to advance individually, which is what three Albert Lea golfers did.

Brady Loch, Lucas Peterson and Alex Syverson will go to state based on their scores. They shot 75, 78 and 78 respectively.

While the team loss was disappointing, Worth said the individual results “temper” that feeling, and he is excited to see how Loch, Peterson and Syverson will perform.

The finals had been originally scheduled to be played at the New Prague Golf Course Monday, but because of heavy rains that weekend, the course was closed due to being too wet.

“We considered it a good break for us,” Worth said, explaining that the Tigers had played a tournament at Ridges in May and were much more familiar with the new course than the one in New Prague.

“It didn’t necessarily work out that way, but we were happy that it was moved,” he added.

While the second round of that tournament was cut in half due to weather issues, the 27 holes the Tigers played there helped them prepare for the section finals.

According to Worth, Loch, Peterson and Syverson each showed significant improvement from the first time they played the Ridges course up through the section finals. Loch lowered his score by 11 strokes, Syverson lowered his by 6 and Peterson dropped his by 2.

The state tourney will be June 10-11 at Ridges At Sand Creek, the same course used for the Section 2AA finals.

With a practice round next Monday, the Tigers will have played four rounds at the Ridges course prior to the state tournament.

While Worth feels like all of his golfers have well-rounded games, he singled out long putting as being one area they would emphasize in practice this week due to the Ridges large greens.

“It will become a course that we should feel quite comfortable with,” Worth said.