Albert Lea teacher and dog to be on ‘Fox & Friends’

An Albert Lea teacher and her dog are traveling to New York this week to appear on a national television show. 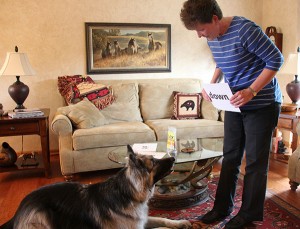 First-grade teacher Peggy Bennett’s dog, Colter, follows the word on a card Bennett is holding on Friday. Bennett and Colter are traveling to New York next week to be on Fox & Friends. – Sarah Stultz/Albert Lea Tribune

Peggy Bennett, who has taught first grade for 33 years at Sibley Elementary School, will appear on “Fox & Friends” on Thursday with her Shiloh shepherd, Colter.

Bennett, meanwhile, is running for the Minnesota House District 27A seat.

Bennett and Colter’s story gained national attention last month after a local media outlet aired a segment about the duo. She has trained the dog to read and obey simple cue cards and uses him as a motivation for her students to read and write in the classroom.

“Teaching is more than test scores,” she said. “You can teach to the mind, and the brain will learn, but if you teach to the heart, they’ll learn so much more. Animals are such a good way to connect.”

Bennett teaches the children about Colter throughout the school year and then brings him into the classroom, typically on his birthday in February. The students write stories about the dog and learn about the importance of practicing to read. 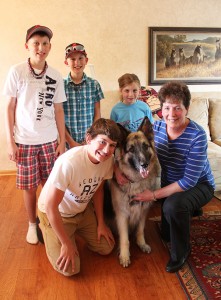 Fellow teacher Shanna Dawson, who had a student in Bennett’s class this year, said her daughter has become an avid reader, in part thanks to Colter’s visit.

“Throughout the year, she would come home excited about the stories they got to read, write and publish about Colter,” Dawson said.

Bennett said she purchased Colter about five years ago from a breeder in Prince Edward Island, Canada. The dog is part of a rare breed that has been around for about 50 years.

Bennett looked for a dog that was good around children and had a he temperament. She has been bringing her animals to the classroom for at least 20 years.

Before Colter, there was her Labrador and border collie mix, Bridger. That dog died at age 15 but also went into the classroom every year for his birthday.

Bennett said she and Colter, along with another teacher and her daughter, were slated to leave this afternoon to drive to New York.

“Fox & Friends” airs from 6 to 9 a.m. Eastern time on Thursday. She was unsure what time she and Colter would appear.