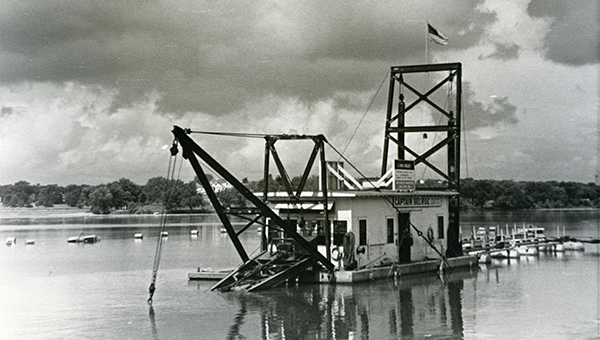 It is said that history often repeats itself, and the developments with the dredging to occur on Fountain Lake as early as 2015 once again prove that saying to be true.

With all of the fuss going into the dredging the last few years, it is easy to forget that this is a process Albert Lea has already experienced twice in the past eight decades.

A folder full of news clippings at the Freeborn County Historical Museum provides a glimpse into a past that holds many similarities with the present.

From 1940 through 1942, and again from 1962 up until the mid-1970s, two dredges trolled the waters of Fountain and Albert Lea lakes, removing silt, dirt, sand and rocks from the lakebeds.

The lakes faced many of the same problems back then that currently plague them now.

The gradual buildup of silt washed into the lakes raised the lakebeds. This disrupted currents and created an environment more suitable for algae and other unwanted vegetation, problems that were exacerbated in Fountain Lake because it had been artificially constructed.

News articles described the lake waters then as having a “slimy appearance” accompanied by “unpleasant odors.”

The buildup of silt was also hazardous to boats, as they could potentially run aground in the shallower waters.

Purchased in the fall of 1939 for $47,000, the Captain George, an electric-powered suction dredge, removed more than 1 million cubic yards of dirt from Fountain Lake, a buildup that occurred because no dredging had taken place during the first 80 years of the lake’s existence.

The dredging project employed more than 80 people, who worked 24 hours around the clock in eight-hour shifts whenever the water was free of ice.

The dredge operated by sucking up loose silt, dirt, sand and rocks from the bottom of the lake like a vacuum. One-and-a-half-foot-wide pipes supported by pontoons transported the material to the dumping sites around the lake. 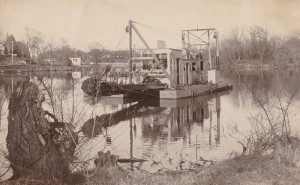 Much of the dirt pulled from the lake was used to create several public parks by filling in swamps and low-lying marshy areas around Fountain Lake.

The Captain George received its electricity from a power plant on the shore. Marine power cables, which were attached to barrels to keep them from sinking, brought 23,000 volts of electricity out to the dredge.

The dredge attracted much interest from the community. More than 600 people came to tour the Captain George in the spring of 1940 before it began the initial dredging.

However, the dredging was at times a source of tension in Albert Lea, as there were disagreements as to who was responsible for paying for the taxes for the dredging and where the dredging should take place.

As the project began on the north side of Fountain Lake, residents on the southern end were concerned that their portion of the lake was not going to be worked on — concerns which proved to be unfounded as the majority of the lake was dredged.

The total cost of the dredging came to $250,000. Albert Lea was responsible for $90,000, while the rest of the funding came from the federal government through the Works Progress Administration, a New-Deal era publics work program begun by President Franklin D. Roosevelt.

The dredge was named for George Ruble, the man responsible for the construction of the dam that created Fo­­­­untain Lake.

“George S. Ruble might be called the Father of Albert Lea, since it was largely because of his activities in the planning, platting and building of our city that we made such remarkable early strides towards becoming a flourishing county seat,” according to a 1940 Albert Lea Tribune article.

In 1854, Ruble wanted to build a dam to provide power for his newly constructed mill. The ensuing project, a dam built across the Shell Rock River by Bridge Avenue, resulted in the creation of Fountain Lake.

The Captain George worked from the spring of 1940 through the fall of 1942 when it finished dredging Fountain Lake and its connected bays. The dredge went unused in 1943 despite proposals to have it moved to other lakes.

The following year the Captain George was sold to Portland General Electric Co. for $35,000, allowing Albert Lea to recoup much of the initial cost of the dredge.

A reduction in manpower due to World War II was one of the causes for the dredging project to be discontinued, according to an article by Ed Shannon, a former Tribune writer and volunteer at the Freeborn County Historical Museum.

The second dredging began in September 1962 and extended much longer than the first, with the work continuing through the mid-1970s.

For more than a decade, the Foun-Da-Lea, which was purchased for $76,000, worked to dredge the Fountain and Albert Lea lakes. 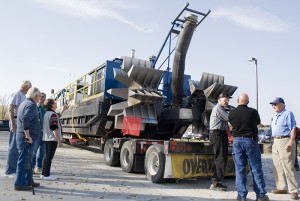 Unlike the Captain George, the Foun-Da-Lea was diesel powered and “much, much smaller,” longtime Albert Lea resident and businessman Mark Jones said.

The Foun-Da-Lea was named for the two lakes it operated on. Casey Ferguson, an 11-year-old Albert Lea sixth-grader, was credited with naming the dredge.

Ron Woitas, who began working for the Albert Lea Parks Department in 1963, is one of the few remaining men who were involved in the dredging project.

While he did not work on the Foun-Da-Lea itself, Woitas’ job involved moving the pipes carrying the silt off of the lakes. Over 3,000 feet of pipeline had to be taken apart and re-assembled as the dredge moved around the lakes.

Lakeview Park, Shoff Park and land by Minnesota Highway 13 were some of the locations the dredged material was sent to, Woitas said.

After first working to clear up Fountain Lake, the Foun-Da-Lea was moved to Albert Lea Lake in 1970, where it stayed through the mid-1970s, well before the lake had been fully dredged.

There were a variety of reasons the dredging stopped before the completion.

According to Jones, the Foun-Da-Lea, which was smaller then the Captain George, was not nearly big enough to quickly dredge the much larger Albert Lea Lake.

Woitas also noted that the Foun-Da-Lea was likely too small to have been able to finish dredging the lake in a reasonable time, but he added that problems with funding and obtaining the appropriate permits also played a role in shutting down the dredge.

Big AL is the name of the new dredge that might begin operating on Fountain Lake as soon as 2015. If there are any lessons to be learned from the past, it is that Big AL will leave behind as many memories as its predecessors.