Funeral services for Bernadine (Bernie) B. Gregerson of Albert Lea will be at 11 a.m. Friday at First Lutheran Church in Albert Lea. The Rev. John Holt will officiate. Visitation will be from 4 to 7 p.m. Thursday at Bonnerup Funeral Service and one hour prior to the service at the church. Interment will be in Graceland Cemetery. 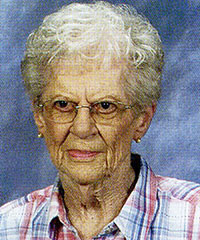 Bernadine was born July 11, 1929, in Redwood Falls, the daughter of Ben and Adina (Fenger) Foelster. She graduated from high school in Redwood Falls in 1947 and Mankato Business College in 1949. She was united in marriage to Charles Gregerson in Willow Lake Township, Redwood County.

Bernie had been a resident of Albert Lea since her marriage. She had been employed by the Mankato Clinic in Mankato, Naeve Hospital in Albert Lea, Bratten Jewelers and the Albert Lea Clinic. Bernie was a member of First Lutheran Church and was active in church circle, treasurer of the Women of the Church and volunteered in the church office for many years.

She was active in the Christian Solo’s and served Meals on Wheels.

Bernie enjoyed golf, practical jokes, travel, cooking, knitting and any family events. She was a wonderful grandma who loved taking the grandkids traveling and they went on many fun trips.

She was preceded in death by her parents; husband; sister, Dorothy Muetzel, and brother, David Foelster.

She will be greatly missed by all, but will be forever in our memory.