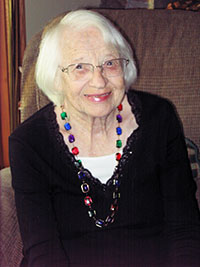 Burnette and twin sister, Beatrice, were born July 2, 1915, the fourth and fifth daughters of Isaac and Bertha (Bergeson) Stensrud of  Freeborn. Burnette “Bur” grew up on the family farm, graduating from Freeborn School and Fairview Hospital School of Nursing in Minneapolis.

The bombing of Pearl Harbor was the impetus to sign up for the armed services. She was inducted into the Army Air Corps as a second lieutenant and served as a flight nurse primarily in the South Pacific from 1942 to 1946.

Upon returning to the states, she was employed at Hines VA Hospital in Chicago, and later the Minneapolis VA Hospital rotating through medical, surgical and instructor in nursing arts and eventually psychiatric care. During that time she earned a bachelor of science degree in nursing from the University of Minnesota and additional training in psychiatric nursing.  She retired in March 1976 at 60 with 30 years of government service.

Retirement allowed for more travel and marriage to Harold (Brick) Carter, which brought her to Houston and more than 20 years of avoiding Minnesota winters. While in Texas her life revolved around Memorial Drive Lutheran Church altar guild, Better Side of 50, Memorial Assisted Ministry, English As A Second Language, exercise at the Y and wherever volunteers were needed.

At 91, widowed, she returned to Minnesota and family.

Burnette was a marvelous woman, often ahead of her time, and an inspiration to her family and friends.

She was preceded by her parents, sisters Mildred, Almeda, Lila and Beatrice; and spouse, Harold Carter.