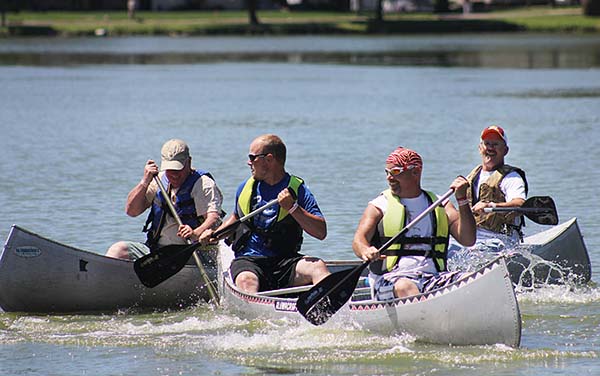 Chad Mattson and Kory Newman, in the front canoe, collide with Jim Buckley and Al Monson in a second canoe during the canoe races at Alden’s Morin Lake Days on Saturday. – Sarah Stultz/Albert Lea Tribune

ALDEN — It was all smiles Saturday afternoon in this community as children and adults alike took to Morin Lake for canoe races.

First, the men participated, drawing cheers and laughs from the crowd of people watching. The men in the first round were instructed to paddle backward on their way out and forward on their way back.

The team with the fastest time in the first race was Al Monson and Jim Buckley at 2 minutes 11 seconds.

The second race, in which the men paddled going forward the whole time, the fastest time went to Kory Newman and Chad Mattson at 2:07.

Casey Soost and Erick Wasmoen accidentally flipped their canoe upside down twice during the races.

“The first one was his fault, but the second one was mine,” Wasmoen said with a laugh after the race.

After the adults were finished, children teamed up with fathers and grandfathers for another race.

Isaac Fuller and his father, David Fuller, won this race at 2:32.

The event was part of Morin Lake Days in Alden, an annual event held to celebrate the community.

“It was super fun to watch — fun for the kids and fun for the adults,” said Melissa Wasmoen, whose husband, father-in-law and son participated. “It’s a great experience to be able to do it.”

Other activities taking place over the weekend included a medallion hunt, a fishing contest, a parade, teen and adult street dances, volleyball tournaments and fireworks, among others.

A group of seven youth found the hidden medallion at about 12:30 p.m. Saturday on an old staircase near the football field. It was the second year for the group — Rebecca Fuller, Jonathan Fuller, Rachel Fuller, Olivia Usselman, Ben Fuller, Isaac Fuller and Micah Fuller — to find the medallion. 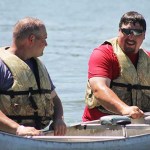 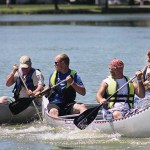 Chad Mattson and Kory Newman, in the front canoe, collide with Jim Buckley and Al Monson in a second canoe during the canoe races at Alden’s Morin Lake Days on Saturday. – Sarah Stultz/Albert Lea Tribune 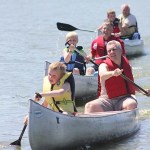 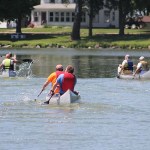