The sidewalk between Fountain Lake and Bridge Avenue across from Walgreen’s drug store features a rather new art medium: spray-on chalk.

It washes away just like sticks of chalk but sprays on just like paint. Organizers of Open Streets hired Albert Lea artist Ryan Heath to paint the sidewalk earlier this week to promote their event, which happens from 9 a.m. to 1 p.m. Saturday. Bridge Avenue from Fountain to Ruble streets will be closed to motorized traffic and open to everyone else. 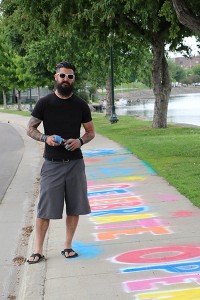 Artist Ryan Heath stands on his spray-on chalk artwork he painted on the Bridge Avenue sidewalk. The chalk washes away with rain. – Provided

“If kids want to race their bikes up and down Bridge Avenue, they can,” said city spokeswoman Teresa Kauffmann.

The chalk shows the name and time of the event and images such as waves, an in-line skate, dog walkers, a skateboard, a scooter and a bike.

The event is hosted by the city, the Albert Lea Convention and Visitors Bureau and the National Vitality Center. They received funding assistance from the Freeborn County Statewide Health Improvement Program, a state effort aimed at bolstering health.

Kauffmann said they had purchased the spray-on chalk from a place near Seattle to promote Open Streets last year, but spring rains prevented its use then. She said Heath commented he had never worked with spray-on chalk before. He was hired for his experience with murals and legal spray-paint work.

The event gives city residents a new perspective on the street, from shopping to socializing. Kids can get a chance to win a bike donated by Cargill as part of a bike skills verification course.

People who attend can expect to see interesting sights such as people hula-hooping on Katherine Island.

According to a news release, some of the other activities that will be featured at Albert Lea’s event are:

Meanwhile, at the Brookside Boathouse on Richway Drive, canoeing, kayaking, paddle boarding and archery will be available to use at no charge. Normally, rent is paid.

“Open streets events, sometimes known as ‘ciclovias,’ originated in South America,” states a city news release. “In addition to demonstrating how to make active living easier and more accessible, open streets events help residents feel a greater connection to their community, support their local businesses and gain an understanding of how local policies and local infrastructure can be improved to support the needs of pedestrians and bicyclists.”