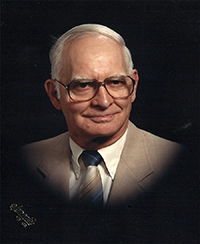 Clayton was born April 12, 1924, in Bancroft to G. W. “Will” Slater and Carrie Jensen. Clayton married Pauline “Polly” Collins on Feb. 4, 1946, and together they raised three children.

Clayton was a Navy veteran of World War II, serving both in the Atlantic and the Pacific after which he returned to Albert Lea with his growing family and worked 42 years for Wilson Meat Packing Company.

After retiring, Clayton and Polly wintered in Mission, Texas, eventually moving full-time to Columbia, S.C., to be near their son and two of their grandchildren. Last December they moved to Milwaukee to be closer to daughter, Nancy.

An avid camper and dedicated family man, Clayton and his wife started the Crossroad Campers, a local chapter of the NCHA. He was a lifetime member of First Presbyterian Church in Albert Lea, where he served as an elder, a deacon and trustee.