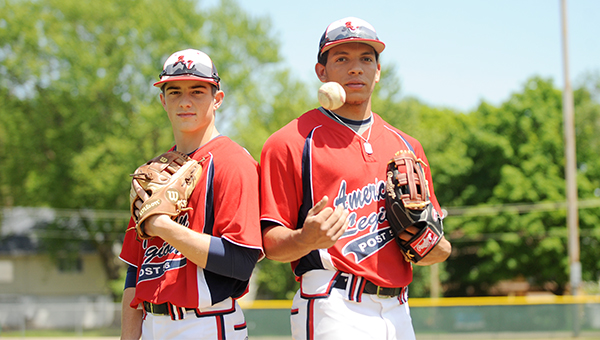 Last season, Lunning didn’t play Legion baseball because he signed with the University of St. Thomas in Minneapolis to play football, and the training camp collided with the Legion baseball schedule. This year, Lunning’s summer will be spent in Albert Lea’s dugout before he goes off to play baseball at Century College in White Bear Lake.

“There’s not any better way to get ready for baseball than by playing this summer,” Lunning said.

During his senior season at Albert Lea High School, Lunning was the Tribune’s baseball Player of the Year. He was also invited to the Minnesota All-Star Series and posted a batting average of .423.

Post 91 has played one game so far this season — an 8-3 loss at Austin — and coach Enderson said Lunning is getting into the swing of things.

“He’s got a lot of rust to shake off,” coach Enderson said. “He hasn’t seen a pitcher in a year, and he was missing the ball (at Austin), but he’ll get better. Everybody will get better.”

Lunning said he plans to play center field at Century College, but he’s not sure which position he’ll play for the Legion team.

“I’m just going to play wherever they need me,” he said. “I know Wyatt (Paulsen) was in center field for the high school team, so I think he (coach Enderson) might want to keep him there.”

Fleek, a year younger than Lunning, was the only senior on the Tigers’ roster this spring. He led Albert Lea to the Section 2AA championship game, a 9-15 overall record and a 4-2 mark in the postseason. Albert Lea was knocked out of the tournament by Glencoe-Silver Lake, the team that took third place at the Class AA state tournament.

Less than a month after the Legion season ends, Fleek will start baseball practice at Ellsworth Community College in Iowa Falls, Iowa. He signed with the Panthers on Jan. 15.

With seven sophomores on the high school varsity squad, some players will take the field for the Legion and VFW, coach Enderson said.

“We’ve got five kids playing on both sides of the fence,” he said. “They’ve got to love baseball because they’re going to be playing a lot of it.”

Last season, Albert Lea combined with Austin because numbers were low, and neither team wanted to pull freshmen up from the VFW ranks.

“It’s a big step,” coach Enderson said about the transition from VFW to Legion. “The game gets a lot bigger and faster from ninth grade to seniors and college players.”

During the opener at Austin, Albert Lea used two pitchers: Chris Enderson and Tristin Muilenburg. Coach Enderson also said Fleek and Tyler Steele will be in the rotation.

“Pitching will be a challenge, but we should be solid defensively,” he said. “It comes down to pitching and availability of kids.”

Next, Albert Lea will play a doubleheader starting at 5 p.m. Tuesday at Owatonna.

The Albert Lea VFW team is off to a blazing start with a 5-1 record. The team is coming off a 4-3 win Friday at Rochester Century.