Funeral services for Darlene Marie Bird, 77, of Freeborn will be at 11 a.m. Saturday at Cross of Glory Lutheran Church in Hartland. The Rev. Dennis Frank will officiate.  Interment will be at Hartland Cemetery. Visitation will be from 5 to 7 p.m. Friday at Bayview/Freeborn Funeral Home and one hour prior to the service at the church on Saturday. Online condolences are welcome at www.bayviewfuneral.com. 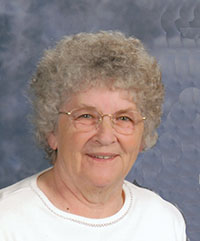 Darlene died Monday, June 9, 2014, at her home, surrounded by her family who have been with her during her struggle with cancer.

Darlene Marie Bird was born at home, 803 Jefferson St., on Oct. 29, 1936, to Ralph and Marie (Sorenson) Leidal. She attended school in Albert Lea and graduated from Freeborn High School. In 1952, she began her employment as supervisor with F.W. Woolworth Co.

On Oct. 30, 1954, she was married to Lyle Bird at the Little Brown Church in Nashua, Iowa. She had lived in Albert Lea, Bath Store, Ellendale and then at the Hartland Shoe Store. After that she was at Lea College where she began work at the library.  She then transferred to the business office where she worked until she closed the door to the college on the last day. In August 1973 she was employed as supervisor at the Southern Minnesota Human Development Center, Freeborn-Mower Mental Health Center and then at the Freeborn County Department of Human Services (Mental Health Center). Darlene was also very involved in her husband’s business, providing monuments to many families. She had a brain aneurysm in 1990 and had to retire in January 1991.  She had another brain aneurysm in October 2006.

She was a member of Cross of Glory Lutheran Church where she was a former Sunday school teacher, Bible school teacher, choir member and member of the Rachael circle.  She was currently still with the Altar Guild.