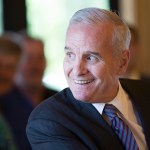 Minnesota Gov. Mark Dayton jokes with those in attendance Friday at Edgewater Bay Pavilion following a ceremonial bill signing. The state is dedicating $7.5 million from the 2014 construction bill to the $15 million dredging of Fountain Lake, which is slated to begin in 2015 if permitting goes smoothly. – Colleen Harrison/Albert Lea Tribune 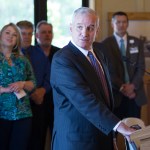 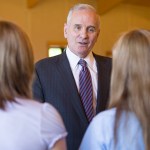 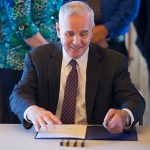 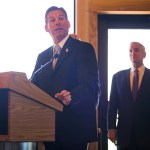 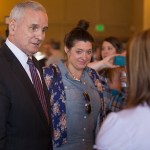 Minnesota Gov. Mark Dayton said Friday he looks forward to Fountain Lake being dredged and becoming a hub for tourism and economic development, “like the lakes up north.”

The governor was in Albert Lea for a ceremonial bill signing for the $7.5 million in state funding to go toward the $15 million dredging of Fountain Lake. The other half comes from a local sales tax. About 80 people came to see Dayton speak at Edgewater Bay Pavilion. Behind him stood 14 officials from Albert Lea, Freeborn County, Shell Rock River Watershed District, the Albert Lea Lakes Foundation and state government.

The ceremony was quick, and officials thanked Dayton for backing the project and roundly praised the community for its support during the legislative process.

“Home run. Home run. Nice work,” Shell Rock River Watershed District Administrator Brett Behnke told the crowd. His agency will oversee the dredging and had pushed for the funding for six years. “We all should be proud of Albert Lea.”

Albert Lea Lakes Foundation President Laura Lunde said the Lakes Foundation was founded in 1934 and noted the passage of funding was 80 years in the making for a lake in the heart of the city.

The state funding for the lake cleanup came from a $1.1 billion construction bill that included many bonding-bill projects. Dayton didn’t have the Fountain Lake dredging in the bonding bill he proposed in January. He said he had to draw $3 billion in funding requests down to $1 billion and drew off many of the projects he had supported in prior years, such as downtown civic centers. Dayton is a supporter of downtown revitalization efforts.

However, Dayton on Friday noted he was glad to see the legislative process work.

“It’s why we have legislators who understand local situations better than I can,” he said.

Albert Lea Mayor Vern Rasmussen reminded people of the importance of Fountain Lake to the community. He said Albert Lea is a city with a lake as its civic center and drew upon the city’s nickname.

“This is the Land Between the Lakes,” Rasmussen said.

Dayton, DFL-Minneapolis, thanked state District 27 Sen. Dan Sparks, DFL-Austin, and District 27A state Rep. Shannon Savick, DFL-Wells, for their work to ensure the project made it into the final bill with the requested amount.

Through the legislative session, Dayton spoke about the positive impact of bonding-bill projects, Sparks said. The state senator praised the work of his counterpart at the Legislature.

Savick could not attend Friday.

Christopher Shoff, chairman of the Freeborn County Board of Commissioners, said his father, Niles Shoff, was Albert Lea mayor 50 years ago when the lake was dredged last. He said Fountain Lake is the heart of Freeborn County and Albert Lea.

Randy Kehr, executive director of the Albert Lea-Freeborn County Chamber of Commerce, led the gathering. He said the pavilion was built with state bonding money from the 2008 session and the field across the street will become soccer fields where a landfill once existed. Representatives from the Bayside Ski Team and the Albert Lea Youth Soccer Association were there to thank the governor and other officials.

Kehr suggested Dayton be driven through the reconstructed downtown on his way to the Tribune building, where the governor met with the Editorial Board. Dayton said he was impressed with the improvements.

He also told the Tribune he liked the idea of a Governor’s Fishing Opener on Fountain Lake after the cleanup is finished but said city officials would need to check their resources then apply to the state Department of Natural Resources.

On Saturday, Dayton will be among officials who will cut the ribbon at the grand opening for the Green Line commuter rail line connecting downtown St. Paul to downtown Minneapolis as well as neighborhoods in between. The ribbon cutting will be at 9 a.m. at Union Depot in St. Paul. Free rides and other ceremonies are planned along the route throughout the day.