Gas drive off in Mower County turns into police chase

Mower County Sheriff’s deputies and Austin Police officers headed off a U-Haul at the intersection of County Road 4 and Highway 218 after a brief chase in the county Thursday morning. – Eric Johnson/Albert Lea Tribune

AUSTIN — A 31-year-old Spring Valley man was arrested Thursday morning after he drove off without paying for gas and led police on a 20-minute chase.

Mower County Sheriff Terese Amazi said the man drove away in a U-Haul truck from the BP gas station in Hayfield shortly before 9 a.m. without paying for gas. Deputies found him traveling south on Highway 56. 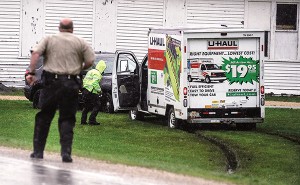 Mower County Sheriff’s deputies investigate a U-Haul that was involved in a short-lived chase Thursday morning that came to an end in the yard of a home near the intersection of County Road 4 and Highway 218. – Eric Johnson/Albert Lea Tribune

The driver led deputies on a 20-minute chase through Mower County before he was eventually stopped in Austin. Amazi said the driver used county and township roads and went as fast as 70 mph.

Police ended the chase at Mower County Road 4 near Highway 218 when Austin officers deployed stop sticks, which the driver avoided by swerving into a ditch. Amazi said the driver got his truck stuck and was taken into custody without incident.

Deputies originally thought the driver had a child passenger, but Amazi said the passenger was a 35-year-old woman. The driver told police he had fled from deputies because his passenger had warrants out for her arrest.

The driver was taken to Mower County jail pending formal charges. He also has warrants out for his arrest, according to Amazi.