Funeral services for Georgia Borghild Johnson will be at 10:30 a.m. Saturday at Grace Lutheran Church. The Revs. Milton Ost and Roger Haug will officiate. Visitation will be from 4 to 8 p.m. Friday at Bonnerup Funeral Chapel and again one hour prior to the service at the church. Interment will be at Hillcrest Cemetery. 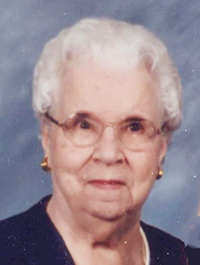 Georgia Johnson passed away on June 17, 2014, at Good Samaritan Society of Albert Lea. She was 98.

Georgia was born March 28, 1916, to Arthur and Grace (Clemmentson) Godtland in Lake Mills. She attended various country schools until the eighth-grade, after which she stayed home to help her family. Georgia was baptized at Lime Creek Lutheran Church by the Rev. H. Engebretson and confirmed at Deer Creek Valley by the Rev. Hans Fosness.

Georgia was united in marriage to Arnold Johnson on Sept. 6, 1935, at Lutheran Parsonage in Mason City. To this union, three children were born, A. Gordon, Bev and Gerald. The couple moved to Minneapolis in 1959, so Arnold could work at the Veterans Administration hospital.

In 1977, much to Georgia’s joy, the family moved back to Albert Lea. Georgia spent her life as a caretaker. She took care of her brothers and sisters, children and her parents when they aged. In her free time, she liked to sew and embroider.

In lieu of flowers, donations may be directed to the Godtland Scholarship Fund at Grace Lutheran Church.

She was a loving wife, mother and grandmother and will be missed by all. God Bless her memory.