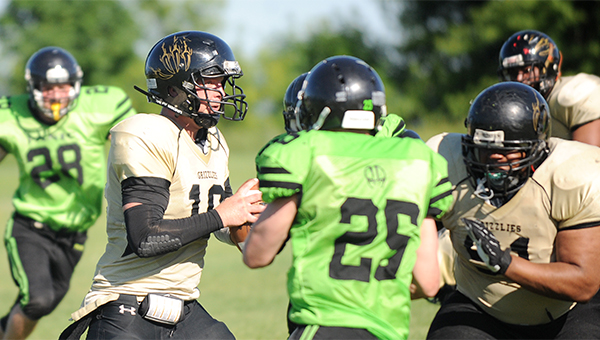 Tony Tolbers of the Albert Lea Grizzlies looks for an open receiver while avoiding the pass rush Saturday against The Panic at Grizzly Field in Frank Hall Park. — Jacob Tellers/Albert Lea Tribune

It was a tale of two halves in the Albert Lea Grizzlies’ regular season finale against The Panic.

However, The Panic surged back in the second half and outscored the Grizzlies 24-13 through the third and fourth quarters. 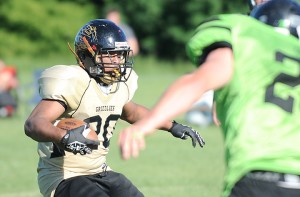 Albert Lea was able to withstand the run to win 42-24 Saturday at Grizzly Field in Frank Hall Park.

On their first drive, The Panic went for it on fourth-and-short deep in their own territory. The Grizzlies defense forced a turnover on downs by stopping The Panic a foot shy of the first-down marker.

The Grizzlies took advantage when quarterback Tony Tolbers found Lamar Sayles on a slant route. Sayles ran down the left-sideline before he dove into the endzone to put the Grizzlies up 6-0.

Later in the first quarter, The Panic moved the ball down the field with a series of passes, but their drive stalled, and they prepared to attempt a field goal. Albert Lea’s special teams unit blocked the attempt and set up the Grizzlies again with good field position.

“We have guys who come in week in and week out and step it up on special teams, said Albert Lea defensive coordinator Jeff Jimenez. “They all have starting jobs on offense or defense, but they commit to special teams.”

A deep pass from Tolbers to Marquis Shaw on the Grizzlies’ next possession set up Albert Lea in the red zone.

The Grizzlies had first-and-goal from the one-yard line, but a sack of Tolbers pushed the Grizzlies back seven yards before the end of the first quarter.

On third-and-goal from the eight-yard line, the Grizzlies lined up with trips to the right and Sayles as the lone running back.

The play opened room on the left side, and Sayles found the  edge for the Grizzlies’ second score. Albert Lea took a 13-0 lead after a failed extra point.

With nine seconds left in the second quarter, The Panic lined up to attempt a long field goal, and the Grizzlies’ special teams pulled through. The kick was blocked, and Albert Lea’s Colton Zuniga returned it for a touchdown as time expired in the first half.

Despite dominating The Panic through the first 24 minutes, the second half didn’t go as smoothly for the Grizzlies as they were outscored 24-13.

“We got a little complacent,” Jimenez said. “We lost focus for a little while and we got toasted for it.”

Tolbers led the Grizzlies through the air with 18 completions for 361 yards and three touchdowns. He also threw two interceptions.

Taking the ball several times from the wildcat formation, running back Lamar Sayles had four rushes for 71 yards and a touchdown.

Marquis Shaw led the Grizzlies’ receiving corps with seven catches for 187 yards and one touchdown, including several key third-down grabs.

Albert Lea’s special teams accounted for 12 of its 42 points. The Grizzlies made four extra points, returned a blocked field goal for a touchdown and forced a safety after a botched snap by The Panic.

With Saturday’s win, the Grizzlies earned the No. 4 seed in the Southern Plains Football League playoffs, which guaranteed at least one more home game.

The Grizzlies (5-3 overall) will face No. 5-seed The Panic (4-4 overall) at 5 p.m. Saturday at Frank Hall Park in the first round of the playoffs.

According to Piper, the Grizzlies will need to focus on proper hydration.

“We did not do a good job of pounding that nail into the coffin,” Piper said. “They (The Panic) are going to come in here next week riding the high from the second half. We’re going to have our hands full.”