Kritzer steps up to be new judge 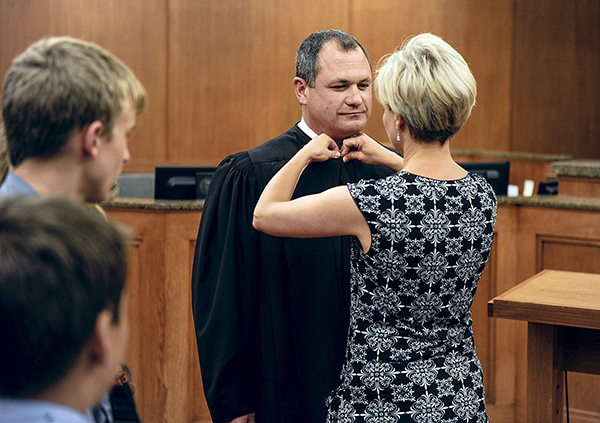 Tammy Kritzer cinches the robes of her husband Jeff who was sworn in as a Mower County judge Friday afternoon at the Jail and Justice Center. — Eric Johnson/Albert Lea Tribune

Jeffrey Kritzer was sworn in as Mower County’s newest judge Friday, two weeks after Kevin Siefken was sworn in. Kritzer will spend the next few weeks shadowing judges before he takes the bench July 7.

“It’s a different perspective from up here,” Kritzer told an audience during the ceremony.

Kritzer, 46, was a partner at Austin’s Baudler, Maus, Forman, Kritzer & Wagner, where his practice focuses on municipal law, employment law, commercial litigation, estate planning, and criminal prosecution for the cities of Austin and Mantorville.

Previously, he was a corporate attorney for Hormel Foods Corp. and an associate attorney for Alderson, Ondov, Leonard, Sween & Rizzi. Kritzer serves on the board of directors and executive committee of the Development Corporation of Austin and is a former member and chair of the Austin Public School Board.

He thanked everyone who had worked with him in Mower County over the years and said he would miss the hallway discussions with other attorneys.

“I’ve truly enjoyed practicing law over the past 17 years,” he said.

Kritzer also thanked his family, citing his wife Tami’s energy and drive as an inspiration, as well as his parents, who he said taught him “more than any teacher or professor did.” He was also thankful for his parents’ patience for his curious nature as a child, from shooting off bottle rockets when he shouldn’t have to making a tennis ball launcher out of four pop cans and lighter fluid.

At the end, Kritzer thanked God.

“I pray that God will give me the strength and the wisdom to be a good judge,” he said.

Kritzer will spend several days out of the week in Albert Lea for the next few months, as he won’t be involved in criminal cases in which he previously acted as prosecutor.