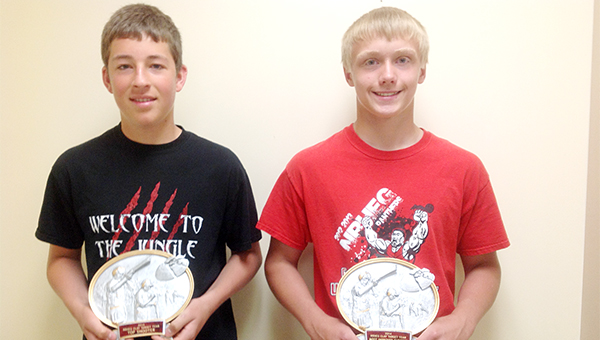 Collin Christenson, left, of the NRHEG clay target team was presented with the Top Shooter award and Alex Buckmeier won the Most Improved Shooter award. — Provided

Taking a week off before the state championship in Alexandria, the NRHEG clay target team took some time to hold a fun shoot and present awards, according to a press release.

A meal, catered by MoeGeo’s of Geneva was served with about 90 athletes, parents and other supporters in attendance. The team recognized 13 letter winners. To letter, a student had to carry an average of 19 or higher for the five-week season, which is the state standard for a varsity shooter.

The team also announced its top shooters. Alex Buckmeier was recognized as Most Improved Shooter. He improved his average by more than six targets per round from the start of the season to the end.

Christenson won the Top Shooter award for his average of 22.8 targets hit per round of 25. Christenson along with Kyle Bartz were also recognized for qualifying for the Minnesota State High School League’s state trap shoot tournament. Students qualified for state by being ranked in the top 100 averages in the state out of the more than 6,000 shooters. Collin was ranked 53rd, and Kyle was ranked 73rd.