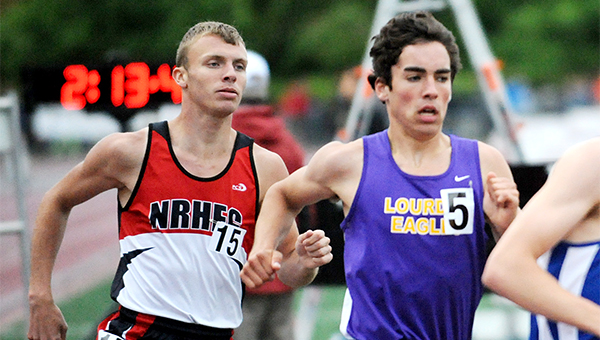 T.J. Schiltz of NRHEG runs behind Ian Torchia of Rochester Lourdes Saturday during the 1,600-meter run at the Class A state track meet at Hamline University. Schiltz finished sixth with a time of 4:23.34. Jacob Tellers/Albert Lea Tribune

ST. PAUL — With a shot to end an already stellar high school career on a high note, NRHEG senior T.J. Schiltz wasn’t discouraged by his 15th-place seed time of 4 minutes, 37.53 seconds in the 1,600-meter run.

Schiltz cut an incredible 14 seconds from his seed time to take sixth place and finish in 4:23.34. 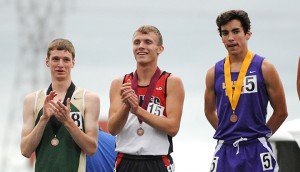 T.J. Schiltz of NRHEG stands on the podium for his sixth-place finish Saturday in the 1,600-meter run at the Class A state track meet at Hamline University. Austin O’Hare of Rushford-Peterson, left, and Ian Torchia, right, also received medals. — Jacob Tellers/Albert Lea Tribune

He hadn’t broken 4:35 this season, but Schiltz was confident he could perform at a high level. At last year’s state meet, he took fifth place with a time of 4:28.18.

“It kind of hit me in the heart a bit,” Schiltz said about his times this season.

However, he was determined to keep improving.

His strategy for the race was to pick several runners to stick with the whole race.

“I felt really strong — the best I’ve ever felt — and I knew when I started that if I could get to a good spot right off the bat that I had a chance to fight them off,” he said.

Schiltz used the leading pack of five runners through the first three laps of the race to set his pace.

In the fall, Schiltz will be on the St. Cloud State cross-country team, and he also hopes to try out for their track and field team. This fall, he won eight of NRHEG’s cross country meets and finished second in the other three. At the Class A state cross country meet, Schiltz finished 32nd.