The funeral service for Ortiz Dalton Anderson will be at 1:30 p.m. Saturday, June 21 at First Baptist Church, 202 E. Main St. in Brownsdale, with the Rev. Ken Petzold officiating. Inurnment will be in Waltham Township Cemetery in rural Waltham. 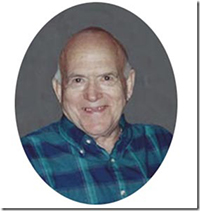 Ortiz was born Aug. 11, 1922, the son of Alfred C. and Clara D. (Johnson) Anderson on their Sargeant, Waltham Township farm. He attended rural School District No. 129 through eighth-grade and graduated from Austin High School in 1940. He was baptized as a young man and became a member of Evangelical United Brethren Church of Sargeant, where he served as a youth helper and Sunday school teacher. As a young man he enjoyed baseball and in later years golf. He helped on the family farm after high school and later he and Ayron purchased the family farm.

At the age of 60, he joined Brownsdale Baptist Church and married Lois (Fawver) Anderson. He served on the deacon board and was Sunday school teacher to the adult class. He enjoyed Bible study. Shortly after their marriage, they moved to Orr, where they lived until his failing health brought them back to the Brownsdale area in August 2004. He lived in Brownsdale until he entered Field Crest Care Center on Aug. 29, 2012.

Ortiz enjoyed woodworking, was an artist and loved to do paintings.

He was preceded in death by his parents; sisters Merle Angel, Erma Anderson and Mavis Brown; and brothers Cecil Anderson and Ayron Anderson.

Visitation will be from 5 to 8 p.m. today at the Czaplewski Family Funeral Home, 302 Market St. in Brownsdale, and one hour before the service at the church on Saturday.   Blessed be his memory.